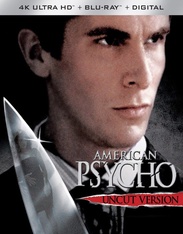 Patrick Bateman, a young, well to do man working on wall street at his father's company kills for no reason at all, collects body parts and displays them in his home. As his life progresses his hatred for the world becomes more and more intense. Based Bret Ellis' graphically violent novel as a 1980s satire.

Rated R for strong violence, sexuality, drug use and language.