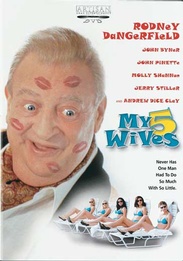 Monte, a rich real-estate developer, has a friend who lets him in on a plot of land, good for a ski resort. The only problem is the new owner not only gets the acres, but the three wives of the deceased owner. The town lives by a religion which is a cross between Mormonism and Amish. He buys another plot of land and gets the two wives from that deceased landowner. Monte is bidding against the local banker for ownership of the land. The banker wants to build a casino on the land and he mixed up with some teamsters.