The Sum Of All Fears 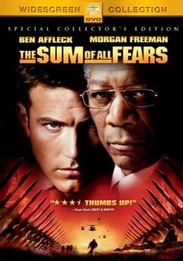 When the president of Russia suddenly dies and is succeeded by a man about whom little is known, tension increases as old fears ignite new paranoia. Director of Central Intelligence Bill Cabot (Freeman) recruits a young analyst from the Russia desk, Jack Ryan (Affleck), to supply insight and advice. Then the unthinkable happens: the capital of Chechnya is leveled by a nuclear bomb. America is quick to blame the Russians and mistrust escalates despite Ryan's certainty that other players are at work. He is right. Terrorists bent on provoking open war between the two nations are moving behind the scenes to manufacture and escalate a conflict. When they successfully detonate a second bomb outside Baltimore during the Super Bowl, the world is pushed inexorably towards war...unless Ryan can supply the needed proof to stem the tide of disaster in time.