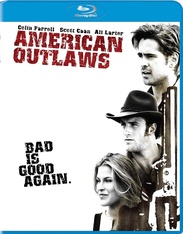 When a Midwest town learns that a corrupt railroad baron has captured the deeds to their homesteads without their knowledge, a group of young ranchers join forces to take back what is rightfully theirs. In the course of their vendetta, they become the object of the biggest manhunt in the history of the Old West and as their fame grows, so will the legend of their leader: a young outlaw by the name of Jesse James.

Rated PG-13 for for western violence.