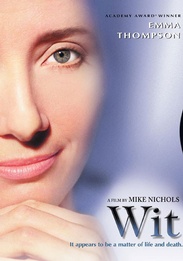 Based on the 1999 Pulitzer Prize-winning play by Margaret Edson, WIT features the Academy Award winning actress Emma Thompson in a movie directed by Academy award winning director Mike Nichols. Vivian Bearing is an English professor with a biting wit that educates but also alienates her students. With her teaching and life both rigidly under control, Vivian would never let down her defenses, until the day comes when they are taken don for her. Diagnosed with a devastating illness, Vivian agrees to undergo a series of procedures that are brutal, extensive, and experimental. For eight months her life must take an uncharted course. No longer a teacher, but a subject for others to study. Vivian Bearing is about to discover a fine line between life and death that can only be walked with wit.