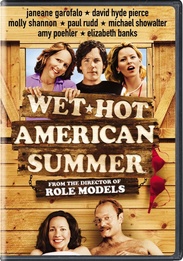 Camp Firewood. 1981. And things are happening. Camp director Beth is falling in love with Henry, an astrophysicist who is trying to save the camp from being hit by a piece of SKYLAB hurtling toward Earth, while camp counselor Coop is pining for Katie, who is in love with lifeguard Andy. If that's not enough, there's a waterfall rescue, talking vegetable cans, the misfits, the cool kids...and much more!