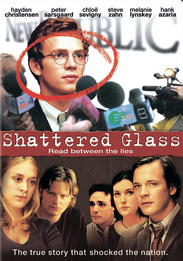 Hayden Christensen stars as Stephen Glass, a staff writer for the respected current events and policy magainze The New Republic and a freelance feature writer for Rolling Stone, Harper's Bazaar and George. By the mid-90s, Glass' articles had turned him into one of the most sought-after journalists in Washington, but a bizarre chain of events suddenly stopped his career in its tracks.

Rated PG-13 for language, sexual references and brief drug use.