We Are The World: The Story Behind The Song 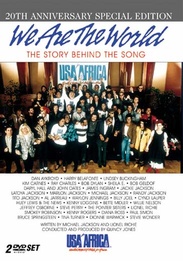 A dream that became a song... an event... and a worldwide movement! See the making of a milestone as 45 of the biggest names in American popular music combine to record a song to help alleviate the suffering of starving millions in Africa and America. Narrated by Jane Fonda, this program provides a behind-the-scenes look at the night of January 28, 1985, to provide more than a moving collection of words, pictures and music - it's a living piece of history.