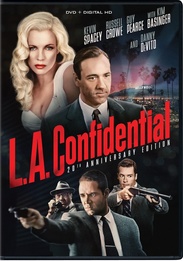 Three detectives in the corrupt and brutal L.A. policeforce of the 1950s use differing methods to uncover aconspiracy behind the shotgun slayings of the patronsat an all-night diner in this lush tribute to tough filmnoir crime films.

Rated R for strong violence and language, and for sexuality.