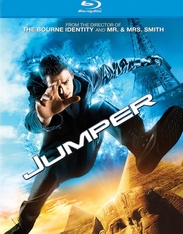 The science fiction thriller leaps into a new realm with JUMPER, which begins the epic adventures of a man who discovers that he possesses the exhilarating ability to instantly teleport anywhere in the world he can imagine. From New York to Tokyo, from the ruins of Rome to the heart of the Saharan Desert, anywhere is possible for David Rice (HAYDEN CHRISTENSEN), until he begins to see that his freedom is not total, that he's not alone... but part of an ongoing, global war that threatens the very survival of his rare and extraordinary kind.

Rated PG-13 for sequences of intense action violence, some language and brief sexuality.