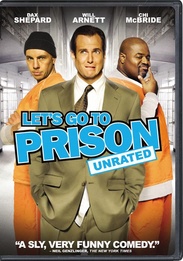 Felon John Lyshitski has figured out the best way to get revenge on the now-dead judge who sent him to jail: watch the official's obnoxious son, Nelson Biederman IV, survive the clink. John strikes gold when Nelson is wrongly convicted of a crime and sent to the pen he used to call home.

He gleefully gets sent back to become Nelson's cellmate and to ensure that his new buddy gets the "full treatment." Let the games begin. Lesson #1: the joint's a scary place, so you better make friends fast. Right away, Nelson offends the wrong cons and is sold - by John - to Barry for prison snuggling.

But just as revenge starts tasting sweet, Nelson becomes Big Man in the Big House and turns the tables on John - changing the rules of his insane game.