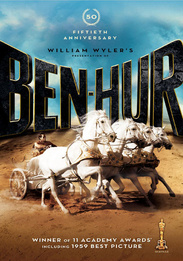 This epic remake of the 1926 film features Heston as the title character, a wealthy Jew whose former childhood friend, a Roman, causes him to lose everything. He eventually gets his revenge in the film's spectacular chariot race.