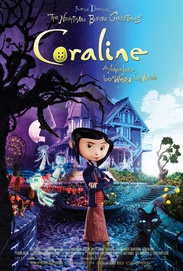 A high-definition stop-motion animated feature â the first to be originally filmed in 3-D â with spectacular CG effects, based on Neil Gaimanâs international best-selling book. A young girl (Dakota Fanning) walks through a secret door in her new home and discovers an alternate version of her life. On the surface, this parallel reality is eerily similar to her real life â only much better. But when this wondrously off-kilter, fantastical adventure turns dangerous, and her counterfeit parents (including Other Mother [Teri Hatcher]) try to keep her forever, Coraline must count on her resourcefulness, determination, and bravery to get back home â and save her family.