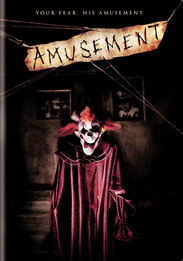 Tabitha. Shelby. Lisa. Theyre longtime friends on separate life paths. B ut they share a horrific destination when a seemingly innocent incident from their school days comes back to terrify them. Something someone wants payback: warped vengeancemind-games vengeancetaunting, shredding, slashing vengeance. Inside a stonewalled chamber of prison cells and mechanisms of doom, the three women and other victims face a fierce fight to survive. Who lives? Who dies? Its all for someones Amusement. From screenwriter Jake Wade Wall (The Hitcher) and director John Simpson (Freeze Frame) comes a new film foray into horror. Turn down the lights. Turn up the fear.