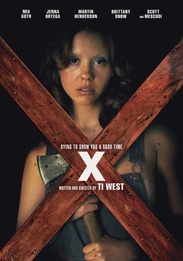 A group of actors set out to make an adult film in rural Texas under the noses of their reclusive hostsâan elderly couple with a farm and boarding house for rent. But when the couple catches their young guests in the act, the cast finds themselves in a desperate fight for their lives in this tantalizing slasher from writer-director Ti West.