Trailer for Renee Zellweger's new movie that 'had me at Hell' 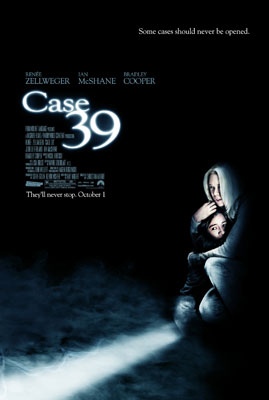 Quick! Name the last big movie Renee Zellweger was in.

It's hard to remember anything significant she's done since Cold Mountain. Maybe even since Bridget Jones's Diary.

Besides the forgettable 2009 film New in Town, it seemed like the Oscar winner had gotten out of acting. Not true. Renee pops back up with a suspense-thriller. The trailer for Case 39 was just released. You can watch it below.

Zellweger will always be remembered for her "you had me at hello" line in Jerry Maguire. You can say the trailer for Case 39 had me at 'Hell'.

Ever since little Regan spun her head around, possessed kids have given me the willies. Heck, I keep a vial of holy water on my little ones' night stands in case they start spewing pea soup.

One big downside to Case 39 is that it's been completed and in the can for over year. The film was released in other countries late last year and is only now getting a release by Paramount Vantage on Oct. 1. That's not a good sign of its quality.