'Paul' teases us with first look at alien on the run 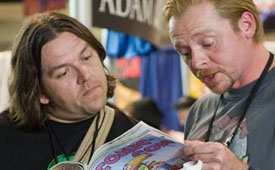 Usually, Mondays are tough to handle. They start the work week and let's face it, with Hollywood on Pacific time, Monday mornings are the dregs in terms of movie news.

So today, our Monday morning was brightened quite a bit by the release of the teaser trailer of Paul from MSN. You see, the talent behind Paul is mostly from the other side of the pond, so their Monday night release is our Monday morning reprieve.

Paul is the new film that re-teams buddies Simon Pegg and Nick Frost, previously seen together in the hilarious films Shaun of the Dead and Hot Fuzz, not to mention the TV series Spaced. This time, Pegg and Frost are life-long friends on a road trip to geek nirvana, Comic-Con.

Along the way, the pair stop off at Area 51 and happen to stumble upon a fugitive alien whom they befriend and promise to help him along his way. Think of all the geek goodies of Jay and Silent Bob Strike Back mixed with Fanboys. And judging from the first footage, we're in for a wild ride.

One element missing from Pegg and Frost's earlier collaborations is director Edgar Wright, who broke away from the pair to direct Scott Pilgrim vs. the World. In his stead is suitable replacement Greg Mottola, who sharpened his comic chops on such films as Superbad and Adventureland.

Watch the trailer below and let us know what you think. Paul is set to touchdown on this planet on March 18, 2011.