Top movies, people and news on our site in 2010 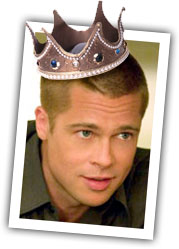 You probably won't read this news story. I don't blame you. It's probably the most stale thing we'll report on this year. But 2010 is indeed coming to a close and we're required by an obscure news law to do a quota of stories recapping the year.

Filling part of that requirement, here are the top requested movies and celebrities on our website in 2010 along with the most read of the news stories we've written here.

Repeating as top dog, Brad Pitt was once again the most #1 most requested star on our site this year. His ex-wife Jennifer Aniston followed close behind but current wife Angelina Jolie wasn't even among the contenders. (Yeah, I have no idea why Swoosie Kurtz made it to #4. She must have done a lot of clicking from home this year.)

Pretty much as expected, Avatar came in #1 for movies with How to Train Your Dragon a surprising #2. It's especially surprising since animated rival Toy Story 3 didn't even make the Top 20.

For the news stories, John's piece on the George Lucas backlash surprised us by being our top viewed article in 2010. It goes to show you shouldn't underestimate the drawing power of hate for the once beloved writer-director. It's even more powerful than the Death Star itself.