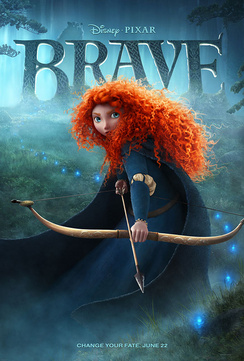 Ah, the joys of the alarm signalling the start to another work week. I don't know what it is about the Summer (ok, yes I do, the great weather), but it seems that Mondays are always twice as hard during the middle months of the year.

Lucky for you, I have just the cure for a bad case of the Mondays, the Monday Morning Mixerâ ¢. It seems that last week's inaugural installment was rather well-received, save for the rather rude eye-opening look at Shia LaBeouf's manhood. But hey, I don't make the news, I just report it.

I guess you could call Shia's indiscretion as a preview of this week's male stripper valentine to women everywhere movie Magic Mike. Men, allow me to suggest dropping the ladies off to see that movie while you and the boys head over to see Ted from Family Guy creator Seth MacFarlane.

But that's next weekend, first let's take a look at all the crazy stuff that happened this weekend.

Pixar proved that 13 was anything but an unlucky number as they maintained their run of perfect #1 openings at the box office for their 13th animated feature Brave. It opened to an estimated $66.7 million which mirrored last Summer's Pixar "bomb" Cars 2's $66.1 million opening almost perfectly.

Cars 2 ended its run just north of $191 million which makes Brave likely on target to surpass $200 million. Interesting side note, of the 13 Pixar releases, only three (not counting Brave) have failed to surpass $200 million at the box office. They are the aforementioned Cars 2, the poster child of Pixar "failure" A Bug's Life ($162 million) and the original Toy Story ($191 million).

Although, I'm willing to bet that Pixar gets the original Toy Story up over $200 after some sort of theatrical re-release in the near future.

Brave is an interesting Pixar movie because it's the most Disney-like of all of its offerings with its veritable "Princess" storyline. It is also the first Pixar movie directed by a woman, thus breaking up the boys' club that had dominated the first dozen Pixar films.

Elsewhere among the new films, my favorite action director whose name I can never pronounce Timur Bekmambetov's new film Abraham Lincoln: Vampire Hunter opened up to a less than expected $16.5 million. The high concept, alternate historical piece hit a sour note with critics according to Rotten Tomatoes, but it seemingly scored better with audiences.

The problem Abraham Lincoln: Vampire Hunter is that with the number of highly anticipated action movies coming out in July, it's likely that it will quickly be forgotten in the melee and end up with a disappointing $50-$60 million. While that sure won't make Fox too happy, at some point you had to know that some films would suffer from the sheer number of top movies opening this Summer.

Finally, Seeking a Friend for the End of the World didn't get any takers and ended up friendless with a meager $3.8 million for the Steve Carrell starer. Combined with the lackluster performances of Crazy, Stupid, Love and Dinner for Schmucks, I think it's fair to seriously question Carrell's ability to open and carry a big movie.

This trailer is one that dropped over the weekend, but we didn't get a chance to feature it on the site as it probably deserved. I openly admit that I have a huge crush on Rashida Jones and that's probably a good thing since she's practically in every other movie out there these days.

That reminds me, I really need to get into Parks & Recreation one of these days.

Anyhow, back on topic, the trailer for her new movie Celeste and Jesse Forever is everything that you would expect a smart, edgy indie to be. The interesting thing is that her co-star is Andy Samberg and from the looks of things, he's anything but his SNL caricature in this film.

Dare I say that Samberg might actually dip into his acting chops and hit a few dramatic chords in this? It sure looks like it. The general gist of the film is that two best friends get married and then realize that they are better off as just friends, so they separate and plan to divorce. The only catch is that they continue to spend all their time together since they are best friends and all and don't know anything else.

Naturally, one of them starts to move on and they are both confronted with the reality of losing the one thing they were trying to save. Yes, it's most likely overly sappy, but I trust these two leads will deliver enough of the funny to make it a tolerable date movie.

After she has fun with her girls at Magic Mike, show her your sensitive side with Celeste and Jesse Forever which opens the first week in August. You'll both likely win.

I've got the 'Need for Speed'

Thankfully, no this isn't news on the still somewhere in development hell sequel to Top Gun (although that is still allegedly coming down the pipe), but rather a film based on the video game Need for Speed.

The game is race car simulator in which you are able to race luxury cars against other luxury cars. If you think this just sounds like another Fast & Furious sequel, you wouldn't be too far off.

The interesting thing about this film though is the studio that picked up its rights, DreamWorks. That would be none other than Steven Spielberg's shingle.

So, that begs the question what will DreamWorks do with the material that they are almost assuredly hoping will be a huge franchise? According to this morning's press release, "Itâs fantastic to be working with a team that shares not only our love of cars, but also our passion for creating blockbuster action experiences."

That was attributed to EA Games Label's Executive Vice President Patrick Soderlund. Meanwhile, Spielberg himself added, "I'm excited about getting back into the creative trenches with John and George Gatins and my partners at EA to bring to life an exhilarating script based on an epic video game that seems to have been made for the movies."

Consider me intrigued at this point. Need for Speed is on track to film next year for a 2014 release.

"It's the interruption of blood supply to a part of the heart often due to blockage."

What is a heart attack?

Sadly, not all news can be good news and this would definitely be categorized as shitty news. Longtime Jeopardy game show host Alex Trebek suffered a mild heart attack on Saturday.

Thankfully, the 71 year old Trebek is doing well. A rep from Sony Pictures Television claimed that he was "in good spirits" and that he was expected to continue hosting Jeopardy when it started filming its 29th season in July.

As someone who grew up watching a lot of Jeopardy, here's to a speedy recovery Alex!

This would have never happened if Matt Damon was still wearing the Bourne name, but The Bourne Legacy announced on Friday that it was delaying its release a week until August 10 to avoid a run-in with late July's The Dark Knight Rises and former fellow August 3 opener Total Recall.

Although, they might be careful because if they keep moving it, they'll eventually run into Dredd and we all know what that means.

Actually, the first trailer hit last week and it wasn't too bad. Again, it's another in a long list of stylized action movies to drop this year. But, it almost has a bit of an indie feel to it like The Raid: Redemption

Well, hopefully the coffee is starting to kick in for you. As always, we hope you enjoyed your Monday Morning Mixer and be sure to let us know if you'd like to see more of them.