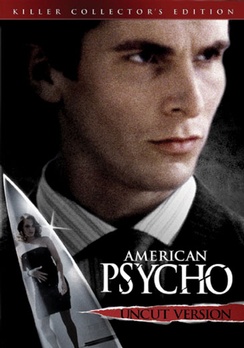 American Psycho is one of those that is quite divisive. You either love it or hate it, there's very little room for middle ground.

Personally, I'm in the former camp and find that the film is a wonderful look at 1980s materialism and the fragility of the human mind's grip with reality in an ever-increasing unreal world. Christian Bale's Patrick Bateman is the next manifestation of Jack Nicholson's Jack Torrance from The Shining - complete with his ax penchant.

The three scenes in particular that seemed to resonate with me most were the ones in which Patrick Bateman expounds on his musical tastes and preference for Huey Lewis and the News, Phil Collins and Whitney Houston. The fact that they all precede acts of violence go to show just how rational and insane Bateman's mind has become.

It also helps that those artists were all part of my own musical education while growing up in the 1980s. Whatever the case, Huey Lewis finally got his revenge on American Psycho and parody artist Weird Al Yankovich in this great video from FunnyOrDie.com.

If you can't remember the exact scene in question or haven't seen American Psycho (blasphemy!), I've embedded the video below.