Monday Mixer: The Sony hack is good for 'Team America' 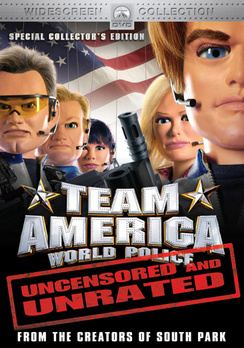 For those following along at home. I did survive my 40th birthday.

Unfortunately my kids did not make it out without getting bit by a bug. So, last week turned in to a quarantine day, but thankfully we all made it out on the other side eventually.

So, what insights were gleaned from turning 40? Well, pretty much the only thing that became clear is that age is just a number. At the end of the day, the world didn't stop. I didn't suddenly wake up with white hair.

The kids still had dirty diapers to change and bills continued to pile up.

No, the only thing that changed drastically between the last MM and today is the fallout and ramifications of the Sony Hack and their eventual decision to pull The Interview from all channels of distribution. This may seem like an odd decision, but you have to remember that Sony is a Japanese country and North Korea is just a short 650 miles away via the Sea of Japan.

At the end of the day though, it's a decision that saddens me because the ramifications are far-reaching and will reverberate for many years to come. Oh great, that just reminded me that 50 is out there closing in fast. Well, we better not waste any more time. Let's get to it, shall we?

It will be interesting to check back next week and see what effect, if any, the pulling of The Interview had on the box office. Safe to say that while the film wasn't expected to be a huge box office hit before the controversy, it's now almost sure to do pretty decent business if it ever sees the light of day.

This weekend Peter Jackson said goodbye to The Hobbit world yet again. While this is the sixth film that he adapted from the series of J.R.R. Tolkien books, it will be a bit weird and sad knowing that we don't have any more films coming. So, did the last film give you closure?

This was the first film in The Hobbit series to open on a Wednesday and it seems that the gamble paid off handsomely. Since Wednesday, The Hobbit: The Battle of the Five Armies has banked a cool $90.6 million. Of that number, $56.2 million was earned during the traditional weekend frame. For comparison's sake, The Hobbit: The Desolation of Smaug snagged a total of $73.6 million during its opening weekend. So, it's not out of the realm of possibility that The Hobbit: The Battle of the Five Armies will end up with $260 million and a spot in the top five films of 2014.

In a virtual tie for second place, Night at the Museum: Secret of the Tomb finished with $17.3 million, while Annie earned a cool $16.3 million. This is a pretty good case study of two sides of a $17 million opening. On the one side, $17 million for the third film in a successful and established comedy series is a bit concerning, especially when you factor in that its predecessor earned $70 million in its opening frame.

On the other hand, the upstart musical remake of a beloved classic is perfectly happy with its $17 million opening. It's funny, had you asked me a few months ago, I would have been shocked to learn that Annie made more than $10 million, a hard-knock life indeed.

The Hunger Games: Mockingjay Part 1 continued on its way towards $300 million with another $8 million weekend. The penultimate film now stands at $289.2 million and should top the $300 million mark this weekend. Exodus: Gods and Kings fell hard in its second weekend, but the film should still top $60 million when it's all said and done.

Top Five is going to be that film that makes $25 million or so that no one will be able to place or tell you anything about it in a couple of weeks. I do give Chris Rock props though as he joked this week while doing press for the film that Top Five is "Korean friendly." Yeah, I think the fallout over the Sony hack is going to be felt for years to come.

Now, Sony is having second thoughts and might release The Interview at some point.

Merry Christmas and Happy Boxing Day to my peeps north of the border. Until next week, Mix Well.