Behind the Scenes: Picking our Sleepers 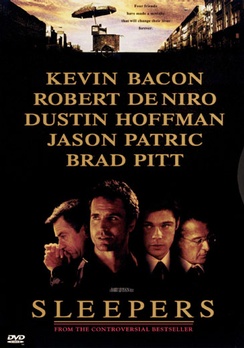 A different type of 'Sleeper'

Every year, one of the most popular features on our site is our Sleeper List of films you probably haven't heard of before. We've presented the lists with little insight as to how we came to pick those films or why we deemed them worthy in such a list.

So, we thought it might be fun to spend a few minutes here to give you a peek behind the curtain if you will. If you're more a "I like sausage but I don't need to see how it's made" kind of person, that's cool too, simply check out a different story. Maybe, you'll like our new He Tweets, She Tweets series.

For the rest of you, allow me to guide you back behind the velvet ropes to the inner workings of VideoETA.

In the early days, these lists were the result of brainstorming sessions between Tim and I to find something unique that we could provide our readers that would (hopefully) shine a light on lesser-known films and generate some buzz for them. Don't worry, we're not delusional. We knew that our traffic wouldn't cause a groundswell and suddenly turn a hidden gem into a box office monster, but it might cause a few people to seek out a film in theaters or on DVD/Blu-ray that they may have previously dismissed.

First though, we needed to define the word "sleeper."

The term "sleeper" means many things and everyone has a different idea on what constitutes one. Is it simply a film that isn't getting the attention that it deserves? Or is it truly only a smaller indie film that probably won't play on more than 5 theatrical screens, if any at all?

Right from the get go, we decided that we needed to take a step back and realize that as a result of working in the industry, we are not normal people. The average Jane or Joe doesn't know who was just replaced in the cast of the latest Quentin Tarantino film, which won't see the light of a movie theater for another year at the least.

We decided that we needed to take a more flexible approach and that we could highlight both true indies and blockbusters in the making. By doing so, it allowed us to highlight diverse films such as Interstellar and Tusk in the same article. Naturally, our personal preferences still play a role and that could explain why I've had a Kevin Smith film on my list for several years running now.

Back in the nascent years, Tim and I would simply fight over the films with no real rhyme or reason. It was a bit messy at times as we would bargain and trade before we each settled on the ten films that we wanted to highlight. Given that Tim and I have similar tastes and likes, it became clear that we were always going after the same films or at least the same type of films.

It became clear that the boys club wasn't working as well as it could be. We needed a fresh perspective and we begged Dannette to help us out. Thankfully, she caved and agreed to join us in our annual foray into the unknown. I'm confident in saying that the feature really took off and enjoys the success that it does because of Dannette's involvement.

Let's face it, Tim and I don't do emotional tear-jerkers much justice, but Dannette is all over it and she constantly surprises and impresses with her sleepers. She also has one of the most consistent track records as well.

For the first couple of years, the three of us brought our own lists together and we bargained for the ones we really wanted. In the end, it worked, but it wasn't very interesting. This year, we decided to implement the first ever fantasy draft for sleeper films.

That's right, we took all of the great principles of fantasy football and made the selection process that much more interesting. Through a blind selection, Dannette got the first pick, Tim got the second pick and pulled up the rear. We used the serpentine format, so I got the 3rd pick and then the 4th pick and so on.

This wrinkle added a new element to the sleeper feature in that we had place a value on the films. It also added an element of strategy to the process because suddenly we were left wondering if that Terrence Malick would slip to the 7th round (spoiler alert: it did).

I know that you're all wondering how the draft played out, well wonder no more. The complete draft is listed below.

I'm sure that you're all shocked that I took Yoga Hosers with my first pick. Going forward, not only will be able to evaluate our performance in regards to picking sleepers, but now we'll be able to judge our ability to draft value.

That's pretty much it. We are always looking for ways to tweak and improve the experience, so if you have any ideas, please let us know. Oh, and stay tuned, I'm really working on hard on getting Dannette to write a little more for the site this year. How cool would that be?