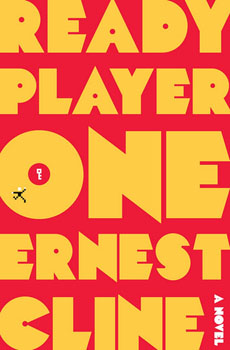 Earlier this week over on Ain't It Cool News, there was a report that Steven Spielberg was trying to coax actor Gene Wilder out of retirement for an upcoming film role. While some people might simply gloss over this news, we immediately latched onto the possibility hinted at in the article, that he might be wooing Wilder to play Halliday in the upcoming film Ready Player One.

Ready Player One is a book written by Ernest Cline, who also wrote the screenplay to one of my under appreciated gems Fanboys, set in the near dystopian future where a virtual reality community known as the OASIS has usurped the plain old Internet to become humanity's favorite pastime. Ready Player One also happens to be one of the best books that I've read in the last decade or so. The book had been in development over at Warner Bros. for years, but it suddenly hit the fast track when it was announced earlier this year that Spielberg would be directing the film.

Spielberg's involvement is a nice touch because the story is a virtual love letter to the 1980s and the culture that the filmmaker was instrumental in creating. In the story, James Halliday, the creator of the OASIS, dies and leaves behind a virtual treasure hunt in the OASIS with the ultimate prize, being the sole beneficiary of his belongs including the OASIS, as the treasure at the end of the hunt.

If that sounds a bit like Willy Wonka, then you can see why Gene Wilder as Halliday would be a perfect match. Yes, Halliday dies at the beginning of the story, but as they say, everything lives forever in the Internet, so there would be plenty for Wilder to do. This potential casting nugget inspired us to try our hand at filling out the cast.

I should warn you that there might be mild spoilers ahead.

For all the reasons above, Wilder is the no-brainer top choice for the role. I would say that Halliday is equal parts Steve Jobs and Willy Wonka, which would be perfect for Gene Wilder. Also, as mentioned, his death propels the story forward early on, so it wouldn't be too much work for the retired actor. Other candidates include Bill Murray, Chevy Chase and Dan Aykroyd.

In the story, everyone in the OASIS creates an avatar to interact with other people's avatars in the virtual reality environment. Meanwhile, their real bodies are connected to rigs that help to simulate the conditions that your avatar is experiencing. So, unless Spielberg is planning to go heavy on the CGI, you're going to want actors that can easily alter their appearance a bit to match their avatar. Colin Ford is one such actor that can be the scrawny kid in real life (although he is described as being overweight in real life) and a slightly more perfect version of himself in the OASIS. His work on Under the Dome has been great and Steven Spielberg is an executive producer on the show. He's just unknown enough to be a great anonymous leading man. Other candidates include Asa Butterfield, Tye Sheridan, Ansel Elgort.

I guess this is the soft spoiler that I referred to above. Obviously, when you can alter your avatar any which way you like, some people are going to become their exact opposite. Aech is Parzival's best friend in the OASIS and the two have a great friendship and there's really no one better at that role these days than Nat Wolff. Gabourey Sidibe is great, fits the description and would only help to make a statement at the big reveal.

This is one of those key, pivotal roles that you need to nail in order for the film to work. Art3mis is a confident bad ass in the OASIS while Samantha is more reserved in real life. Evan Rachel Wood has the range to play both parts equally well. She's also a chameleon who can alter her looks drastically at the drop of a hat. Art3mis also has to be well-versed in '80s pop culture and comfortable enough to simply hang out and be "one of the guys." Evan's recent work with the John Hughes musical project makes her uniquely qualified for the role. Other candidates include Jena Malone, Dakota Fanning and Emily Browning.

Wil is good friends with author Ernest Cline and actually does the reading of the audio book version. I love his take on the story and having the former child actor in the cast would be another homage to the '80s. Age-wise Sorrento is the only real option for Wil Wheaton and he's the main bad guy, but he's a good match as well. He's an older version of Wade, so he needs to have some geek cred and yet still be diabolical enough that he's willing to do whatever it takes to get the prize first.

This relative newcomer was great in the Maze Runner films and he'd be a great addition to the cast.

He and Daito have a familial relationship and these "brothers" have each other's back no matter what. Casting a lead this young is hard to do since there's not a lot of work to judge someone on, but Forrest Wheeler has been great in Fresh Off The Boat. If he has the chops to pull off the challenging role, then he would be a good choice.

If Halliday is Jobs, then Morrow would be his Steve Wozniak. Described as a cross between Albert Einstein and Santa Claus, it's not hard to envision Dreyfuss in the role. Besides, who wouldn't want to see if he and Spielberg have any of that Jaws/Close Encounters of the Third Kind magic left inside themselves?

So, how did I do? Share your thoughts and casting suggestions below.