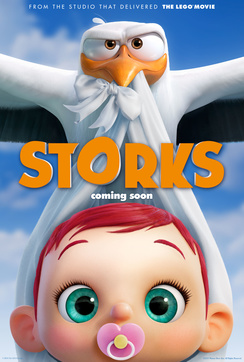 If you want to see the worst trailer released so far in 2016, simply scroll down and watch the official first trailer for Storks. This is especially disappointing after the success of The Lego Movie seemed to elevate Warner Bros. to the upper echelon of animation heavyweights.

I realize that I'm not the target audience of this film and after seeing The Angry Birds this week with my kids, I realize more than ever that they can enjoy a film on a level that I'm no longer able to. Either that or their innate lack of experience in watching good films is skewing their appreciation level.

Yeah, let's go with that because The Angry Birds wasn't a particularly great film, it was just OK. The one random homage to The Shining was interesting, if not a bit out of place, but that was it. Yeah, I didn't get it, much like I don't get this trailer for Storks.

From the gist that I'm picking up from this trailer, Storks no longer deliver babies and that's bad for some reason. There's an orphan girl that serves some sort of purpose and a bunch of random wolf jokes that fall flat. Again, this is the first full trailer for the film and I would think that it would do more than simply make me yawn and wish that it were over.

Storks is due in theaters on September 23, but perhaps I can talk my kids out of going to see it.