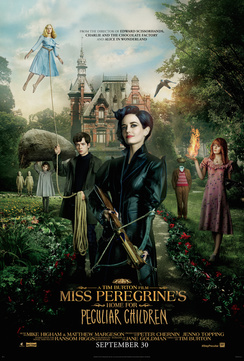 I've had Miss Peregrine's Home for Peculiar Children on my to-read book list for years, but I've never gotten around to picking it up. Something about having two children under the age of five and the loss of anything even resembling free time, but the film adaptation is definitely not something that I'm going to sleep on.

In fact, Miss Peregrine's Home for Peculiar Children is one of my breakthrough sleepers of the Fall. It is a film that I strongly believe may be the biggest surprise hit of 2016. Of course, it doesn't hurt when you have someone with Tim Burton's track record calling the shots.

The real kicker for this film though is that the story upon which Tim Burton is able to paint his masterpiece is as equally strong as any of the awe-inspiring visual oddities that the director can come up with. Over the course of the two trailers for the film, the studio has continued to peel back the layers ever so slightly to help raise your anticipation level just enough.

Today's latest offering reveals a much better look at Samuel L. Jackson's villain and the whole time-manipulation MacGuffin that allows the story to exist in the first place. It's true, I spend a lot of time complaining about the state of today's movie trailers, but it's really refreshing to finally see a studio get it.

As a side note, is it just me or are those twins not just the creepiest thing that you've seen on film in a long time? They really take it up to a Shining level of disturbing and I'm just unsettled every time they show up on screen.