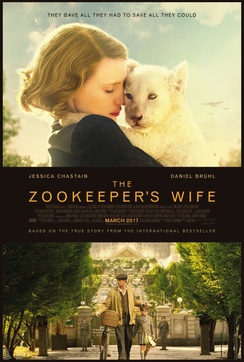 After countless films detailing the atrocities of World War II in the last 70 years or so, you would think that they would run out of stories to tell. And then, something like The Zookeeper's Wife comes along. Sure, it's easy to simply dismiss it as another quasi-Schindler's List, but the power of its message isn't easily duplicated.

The true power, of course, is that both films are based on true stories and the fact that so many powerful films are still being made speaks volumes to the true strength of the human spirit in the face of true evil. In fact, you could argue that these stories need to continue to find the light of day to prove that everything during that time wasn't simply black and white. In truth, there were many shades of gray that stood up to Hitler and his army of hate-slinging Nazis.

In The Zookeeper's Wife, an adaptation of the novel by the same name, Jessica Chastain plays Antonina the titular character who helps her husband look after the Warsaw Zoo. Anyone with even the most elementary understanding of World War II knows about Poland and the Warsaw Ghetto and all of the atrocities carried out against Jews there in late 1939 and in the following years.

What people probably aren't too familiar with is the story about the role that Warsaw Zoo played saving hundreds of Jewish lives during World War II. Finally, The Zookeeper's Wife is able to share that tale with film audiences everywhere.

The film is full of moments of introspection and the action is interspersed enough by slower scenes to allow the audience to meditate on the ramifications of the events that went down in Warsaw. The graphic war violence aside, the film is almost safe to watch with children as the many animal sequences and their fate as a result of the war is something that people don't usually spend much time thinking about.

However, the real star of the film is the strong performance turned in by Jessica Chastain. She was previously nominated for Best Actress in Zero Dark Thirty and for Best Supporting Actress in The Help, but her Oscar profile might just get the biggest boost from this film.

Given the film's early release date, it's no lock that she'll even be nominated for, let alone win, an Oscar, but her performance is one of those rare ones that get the label Oscar-caliber and for good reason. I think this performance just proves that when it comes to Jessica Chastain and Oscar, it's not a matter of if, but when.

The Zookeeper's Wife is now available on DVD and Blu-ray.