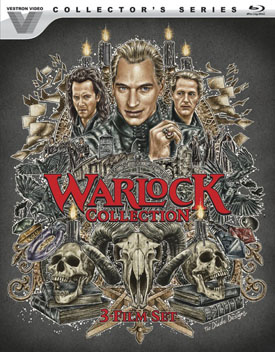 We have written about the Vestron Video Collector's Series before and if you are a fan of 1980s/1990s horror, then I'm preaching to the choir. If you don't consider yourself a horror aficionado, then might I present to you a collection of films that proudly bathes itself in just about every clichÃ© and trope of the genre from this time.

To simply dismiss the Warlock movies as horror films would be a disservice to this diverse collection of films. The original Warlock is more of a dark comedy action film than a full-on 1980s slasher flick. Released in 1989, Warlock is a bridge between the two eras in horror and yet defies simple classification.

I have heard many people compare it to the original Terminator film with a warlock traveling to the future in the place of a robot traveling to the past. I have to admit that it had been at least 20 years since I had seen Warlock before sitting down to review this collection and I couldn't help but see these connections turn up time and again in Warlock. Of course, that begs the question, was I simply projecting the parallels into the film or where they intentionally there all along?

I had not previously seen either Warlock sequel because I was finishing up high school and college respectively when they were released and, let's face it, I was more concerned with other pressing matters at that time. Warlock: The Armageddon gets the one-man band that is Julian Sands back as the titular character, but little else from the film even resembles the original Warlock.

The original film had a rather simple premise that played out rather elegantly, but in the second film, they introduce druids and stones imbued with special devil-defying powers. The same end game is there, to raise Satan to Earth to destroy existence, but the complicated plot points tend to stretch the limits of my suspension of disbelief and are laughable at times.

If you think they would get the franchise back on track for the direct-to-video third film Warlock III: The End Of Innocence, don't hold your breath. This one is the most straight ahead horror film of the bunch and as such, will have you comparing it to every other horror/erotic film to come out in the 1990s. Personally, I would choose to watch Embrace of the Vampire again, but that's just me.

Also, what's up with the different methods in destroying a warlock? In the first film, they use an injection of salt water, then it's light (no really) and finally by the last film a good stabbing in the heart is enough to vanquish the evil warlock curse. I know it's petty, but watching all three films in succession like this, it stood out as a major plot hole and one that still sticks in my craw.

Of course, as a collection, there's a little bit for every horror film out there. There's plenty of cheesiness in the second film especially. All three films are making their debut on Blu-ray and as such, they have been completely remastered for the occasion. You can tell the difference simply by looking at the trailer above.

Speaking of new features, the collection is packed with extra goodies that are (correctly) heavier on the first film and dissipate over the collection. The new interviews with Julian Sands and director Steve Minor, in particular, stand out as welcome additions to the Warlock universe.

I do have to say that I am a bit disappointed that the collection did not contain the deleted scenes from Warlock. There are several scenes that appeared in various trailers over the years but were simply cut or altered in the final film. I was really expecting these to be included in this set and honestly I was a bit bummed that they were missing.

That's not to say that their omission is cause for too much concern. As it stands, the collection is a great value and these films have never looked better. If you love horror films from this era, then I would recommend picking it up. Even if you're simply a fan of the first film, I think the better quality of this version and the extra goodies that are included are worth the investment. You could think of the sequels as simply bonus features to the original film, if that eases your mind.

The Warlock Collection is now available on Blu-ray.