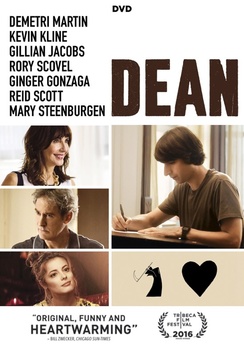 I have to admit that while I sometimes fashion myself as a pop culture aficionado, there are moments when I am woefully clueless. Demetri Martin is the latest example of a glaring hole in my expertise, but it's better to be late to the party than not arriving at all, right?

As my wife and I sat down to watch Dean, I said that I thought she'd like it because the trailer reminded me of one of her favorite films Garden State. As soon as the film started, she exclaimed, "Oh cool, it has Demetri Martin in it, he was on The Daily Show and Flight of the Conchords.

As I said, sometimes I'm a bit slow on the uptake.

Not only does the film star Demetri Martin, but he pulls triple duty here as writer and director. The writing was funny and poignant at the right moments and the direction was capable and certainly not pockmarked by the obvious tell-tale signs of a novice director. It's pretty apparent that the young talent has soaked up a tremendous amount of knowledge with his ample work both in front of and behind the cameras over the last 15 years or so.

While I can't say enough nice things about Demetri Martin, the real star of the film is the always excellent Kevin Kline. There's a scene in which Kline's character is packing and busying himself with bubble wrap. I couldn't help but think during this scene that I wish I could wrap the actor up in bubble wrap and protect him so that his brilliance will grace our screens for many, many decades to come.

Kevin Kline has always been an actor that I have admired and he's on full display here. In fact, Demetri has crafted Kline's Robert with so many poignant moments that it's a nice departure from Kevin Kline's usual comedy. These moments bare Kline in a way that I haven't seen since The Extra Man.

Speaking of the 2010 film starring Paul Dano, if you notice similarities between that film and this one, you are not alone. I have long held that The Extra Man was a grossly underrated film and Dean is its spiritual cousin that would make for an interesting double feature.

Another performance that is worth mentioning is Gillian Jacobs. The Community star has been looking for her crossover breakthrough on the silver screen and while Dean won't be that film, it's not for a lack of trying. She plays the Natalie Portman role to Martin's Zach Braff, but with Nicky she provides more depth and intrigue that makes for an interesting turn towards the end of the film.

Ultimately though, Dean is the story of a father and son dealing with the loss of their matriarch. For the father/husband, his grief is outward and obvious, while his son's reaction is more internal and demurred. As the father of a young son, I found myself identifying more with Kevin Kline's character and wondering how even now, after only four years, my son and I differ on so many things.

We are quick to judge when things don't always line up with our world view, but as is often the case, there is more than one way to look at things. Every now and then, it's good to step back and consider the other side and Dean paints that message loud and clear over its 93 minutes.

Dean is now available on DVD.