'Solo' trailer just one of many Super Bowl movie surprises 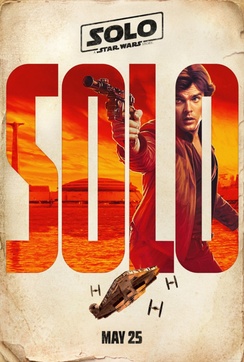 Usually, I'm a bit more in the know when it comes to Super Bowl movie ads before the big game. Unfortunately, time constraints being what they are, I went into the Super Bowl with practically a clean slate in terms of what films would be having big moments during the NFL's biggest game.

Traditionally, the Super Bowl movie ads are a good barometer for the upcoming Summer movie season. It is as close to a leading indicator that we have on the box office performance a few months from now. Given that the Super Bowl is most often the most watched live event on TV for the year, it only makes sense that studios would take advantage of all of those eyeballs to showcase their upcoming wares.

Yesterday morning I started to speculate about which films we would see during the big game and the usual suspects came to mind, Jurassic World: Fallen Kingdom, Avegers: Infinity War, but that was pretty much it. Sure, there was a tiny thought in the back of my head that we might see something about Han Solo, but given the director fiasco and reshoots, I was still confident that the film would get bumped back off of its May 25 release date.

As it turns out, Han Solo (I refuse to call it by its terrible official name Solo: A Star Wars Story) was just one of several surprises that would be revealed as the night wore on. Perhaps the biggest surprise of the night was the first footage and then the immediate post-game release of The Cloverfield Paradox on Netflix. Sure, there were rumblings that Paramount was looking to punt on the film, but no one saw this coming.

More on The Cloverfield Paradox later, but for now, let's go over all of the movie commercials from the big game and/or their corresponding full-length trailers that were released promptly on YouTube.com. First up, there's a new commercial for the Jennifer Lawrence spy flick Red Sparrow. Other than some new evidence that J Law never quite mastered that Russian accent, there isn't much new here, but I doubt Fox needs to hard-sell this one anyhow.

What can I say about Paramount? I will say that they were very active in their Super Bowl ad buys, but it remains to be seen if it will actually translate to positive business for a studio that is struggling to find its next big hit. So far, everything on A Quiet Place has looked great and there's only a small bit of new footage on its Super Bowl ad, but I was so hoping they would reveal that God Particle was all a big smokescreen and that this film was truly the new Cloverfield. It is not, but still A Quiet Place has the promise to be sneaky strong earner for Paramount.

The trailer for Skyscraper is another one that came out of thin air. To be frank, I sort of forgot about this film. I mean, I knew that Dwayne Johnson had a summer film coming out as predictable as Santa Claus descending chimneys on December 24, but I was foggy on the details.

The commercial was rather predictable, but the full-length trailer was more interesting. For those of you looking for The Rock starring in Die Hard, then Skyscraper will scratch your itch on July 13.

Disney didn't waste any expense when it came to their Super Bowl ads, and why should they? They have single-handedly owned the box office for the last two years and they are set to make a killing over the next five months with two Marvel films, a Star Wars movie and the latest offering from Pixar.

I was a little surprised that we didn't get a fresh look at The Incredibles 2, but I think they realized that their core demographic for that film wasn't watching the Super Bowl. Instead, we got two commercials for the Marvel films Avengers: Infinity War and Black Panther and our first look at Han Solo.

Han Solo is sure to be an enigma when it comes out on May 25. I was firmly in the camp that it would move into the fourth quarter, namely because Disney has a heavy release slate to start the year already with the above Marvel films and the reshoot situation would necessitate. Disney remaining quiet this long on the film only fueled my speculation, but they blew that theory out of the water yesterday.

The 30-second commercial during the game was more noteworthy for its inclusion rather than any content in the scant time it was on the screen. The full trailer released this morning shed more light on the story and the characters involved in the latest tale from the galaxy far, far away.

After the outrage some fanboys displayed over last year's The Last Jedi, it will be interesting to see how this film will be received. There are a lot of variables at play though (moving the release date to the traditional - and more competitive - Summer period, the director shuffle, etc.), so if the film fails to live up to the franchise's expectations, it might be difficult to pinpoint the exact cause.

Tom Cruise returns as Ethan Hunt this summer with Mission: Impossible - Fallout. Considering that the Mission: Impossible franchise is practically the only bright spot in its recent theatrical run, I'm sure Paramount will keep churning out these type of films until its leading actor gets too old to perform all of his death-defying stunts. Given that production on this film was shut down for several weeks after Cruise was injured, the end of Paramount's golden goose might be sooner than they expect.

There are few films with as few question marks associated with as Jurassic World: Fallen Kingdom. In other words, it's a good bet that it will be competing for the year's top spot at the box office. This trailer didn't do anything to dissuade me from this thought process.

And this brings us to the night's biggest surprise, The Cloverfield Paradox. We had heard rumblings late last week that Netflix might be a likely home for the troubled film, but we never anticipated the actions that arose last night. Given this franchise's unique marketing playbook with each film, nothing should shock us and yet we were left with our mouth slack shortly after the Eagles celebrated their victory on the field.

Earlier in the evening, we got our first look at the film in a commercial with a tantalizing tease at the end that it would be debuting on Netflix "Soon." Soon turned into now when the game ended and Netflix ran another commercial announcing that you could now view the film on its streaming network.

Suddenly, you had a choice. You could watch the over-hyped episode of tear-jerker This is Us or flip over to Netflix and check out this mysterious new and unexpected film. Or, you could do like we did at our house and watch This is Us before flipping over to The Cloverfield Paradox.

I won't spoil the film for anyone looking to stay unsullied, but there's no question that the distribution and marketing plan for the film is unique and in line with the rest of the films in the franchise.