The curious case of the 4K UHD version of Terminator 2: Judgment Day is one that would almost be as compelling as the film itself. Initially announced for a Fall 2017 release, the 4K UHD disc and alternate Limited Collector's Edition complete with Terminator EndoArm were pushed back by Lionsgate.

Finally, on December 26, the 4K UHD disc was released, but the Collector's Edition with EndoArm listed at the whopping suggested retail price of $174.99 was suspiciously absent. Of course, this is The Terminator, so it was only a matter of time for it to be "back." Fast forward to this week and we finally have the release of the Limited Collector's Edition 4K UHD Blu-ray with "Exclusive Terminator EndoArm Packaging."

When I got word that I would be able to review the 4K UHD of T2, I was momentarily struck with giddiness that I might be able to hold in my hand one of these very cool Terminator EndoArms. That joy was short-lived (and I knew it was a long shot, to begin with) when the 4K UHD of the film arrived sans Terminator arm. Sigh.

But again, while the Terminator EndoArm would have been a cool tchotchke to have on my desk, the real treasure was owning the seminal science fiction film of my lifetime on the best format currently available.

First and foremost, it is clear that the 4K UHD version of the film is the highest quality visual representation of the film currently available to own, but is it really a good 4K UHD film? The HDR is a nice touch and certainly adds complexity to a film that constantly moves between extremely of low light and full sun.

What is odd is that the film looks too perfect. It has been reported that writer-director James Cameron oversaw this brand new transfer, but interestingly, the transfer wasn't initially for 4K. This transfer was intended to be the source material for the aborted 3D Blu-ray which would explain the absence of noise and grain on the video transfer. Obviously, Cameron cleaned up the print to the point that it would present the best visuals for 3D, but in doing so, the 4K version is just wonky, for lack of a better word.

Certain scenes are too sharp, which causes an effect where some of the CGI takes on the faux appearance of being animated. A couple of times, the contrast was so striking that it really takes you out of the film. You truly notice the differences and that's never a good thing.

That said, the 4K transfer is still a step above the existing Blu-ray 1080p transfer and if you hadn't gotten around to upgrading to the Blu-ray version of T2 yet, then this version would certainly be on your must-own list. The one other interesting thing is the that the only version of the film that was upgraded to 4K was the theatrical version. That's fine, I suppose, but just a bit puzzling. I can see why you would only want to port the theatrical version to 3D, but at this point, you would think that they would want to bring the longer Special Edition or Ultimate Cut to 4K.

Another disappointment came with the audio track. The 4K UHD uses the same 5.1 DTS audio track as the existing Blu-ray. This is a film that should have a Dolby Atmos track for its 4K UHD as the standard. Terminator 2 is a pivotal science fiction film in the history of Hollywood and, as such, should be released with the best possible transfer and audio available. It really should be a showcase film for 4K, but unfortunately it is not.

However, this is one new special feature with this version. All of the special features are on the Blu-ray disc and while most of them are regurgitated bonus features from past incarnations of the movie, there is one new documentary that is quite impressive.

"T2: Reprogramming the Terminator" is a fun look at the film and its impact on the Hollywood landscape. With a running time clocking in at almost an hour, it truly does bring added value to the 4K UHD version.

As for the Limited Collector's Edition, I can only say that if you can afford the $174.99 price tag, then you will not be disappointed. As a perk of my day job, we are fortunate to have a bunch of film tchotchkes and sales awards lying around and my favorite is one for the original home entertainment release of T2. The huge shadow box poster frame not only includes several human skulls, but it also has a Terminator EndoArm. It is hands down the best conversation starter in the office and you will be the envy of every single one of your film buff friends with this sitting on your mantle. 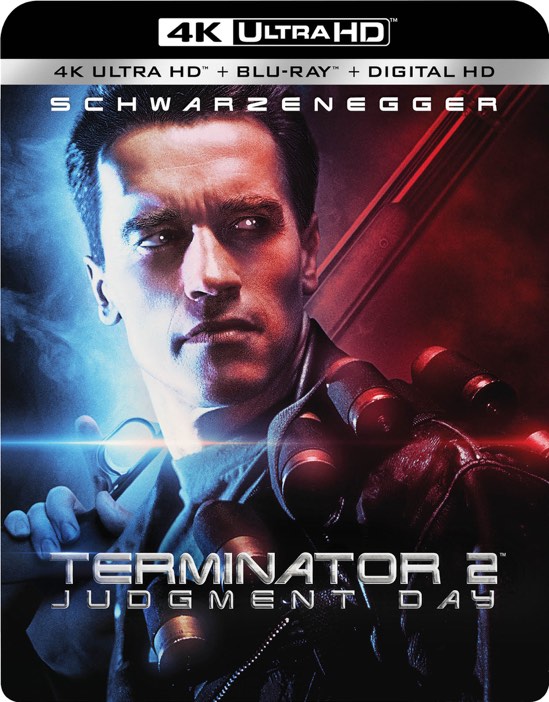