Review: Keanu goes through the motions in 'Siberia' 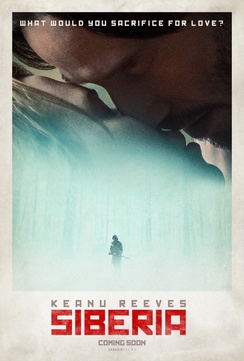 There is a trend with these late in life action heroes. At some point, actors like Liam Neeson continually churn out brain-dead action films of varying degrees of quality one after another until we finally push back. While I think The Commuer was Liam's wake up call, Keanu Reeves has yet to answer that particular ringing phone yet.

Ever since the release of John Wick in 2014, we have been enjoying a Keanu renaissance that has us dreaming of his Matrix days. While the John Wick sequel was also quite enjoyable, Keanu's success with other action films in the last five years has been mixed at best.

This is where Siberia comes in. The premise is enticing enough and the promise of seeing Keanu share the screen with Molly Ringwald has at least piqued our interests to the point that we dust off the old Blu-ray machine and spin the disc. This, sadly, was the high point of the experience.

In Siberia, Keanu plays a U.S. diamond merchant who gets caught up with the Russian underworld when a business transaction goes sideways. Naturally, bullets fly when Russian mob bosses feel like they are getting ripped off and Keanu springs into action.

It is clear that while Keanu enjoys his refound glory as an action hero, he is also trying to avoid a similar fate that befell Liam Neeson. He has continued to expand his horizons (if you can call it that) by taking jobs in Destination Wedding and The Neon Demon to keep things interesting.

Unfortunately, audiences want to see him in more John Wick roles and he always seems less than thrilled to comply. Don't get me wrong, when he's John Wick, he turns on the charm (or rather lack thereof) and is absolutely satisfying as a vengeful killing machine. In other roles such as Siberia you can tell that he's simply going through the motions and the result in an uneven film that fails to maintain your interest.

Of course, Keanu's laissez-faire attitude isn't the only thing holding Siberia back. The script is rather uneven itself with the tone shifting wildly between scenes set in Siberia and the rest. When the film is clicking, it does seem like it's on the edge of blossoming into something more profound, but then the next beat deflates all of the built up momentum and things become more frustrating.

The one actor who seems to be in on the joke though is Pasha D. Lychnikoff. You have seen him pop up in numerous TV projects usually as Russian mob types or the like and he gives a rousing performance as Boris Volkov that is worthy of Bond-type villainry. It's sad because the film never lives up to his level of performance and when it comes to its conclusion, I felt that his portrayal was wasted on a shabby script.

Another fresh face Ana Ularu plays Keanu's love interest and she really brings a Milla Jovovich feel to the role of Katya. The film spends an inordinate amount of time between the sheets that I was wondering if it was going to take a fun turn into a psychological thriller at the end and salvage the movie. Alas, it did not and her worthy performance is again underappreciated in the grand scope of things.

To be fair, the film does not promote Molly Ringwald's involvement as anything more than the glorified cameo that it is but seeing her name attached to the project alone piqued my curiosity. She only appears opposite Keanu Reeves in one scene and the rest of her screen time takes the form of Skype calls. It was a bit of a letdown because now there's a big part of me that really wants to see that film where Keanu and Molly are married trying to navigate his clandestine life as a hitman for a local criminal element. Now that has potential.

Sadly, Siberia is not that film. No, it will go down as simply another in a proliferating list of 285{Keanu Reeves action filler films to satiate the hunger until the next John Wick debuts. For those keeping score at home, John Wick 3 hits theaters in May.

Siberia is now available on DVD and Blu-ray.