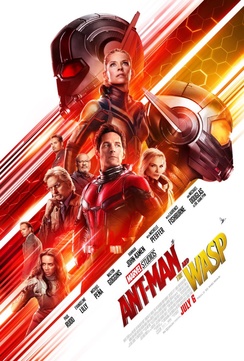 Let's face it. When Avengers: Infinity War ended things were rather bleak in the Marvel Cinematic Universe (MCU). Tears were shed and a pall was cast across the galaxy as we longed to find another fan to help us survive until next Spring when Avengers 4 would, hopefully, provide us relief.

Rather than have its entire fandom mourn Infinity War for an entire year, Marvel provided us with a much-needed palate cleanser in the form of Ant-Man and the Wasp. While the comedy-centric Ant-Man movies don't deliver the same box office bang for their buck as their action-oriented brethren in the MCU, I find them to be some of the most enjoyable films in the series.

In Ant-Man and the Wasp, Scott Lang returns as Ant-Man, but he finds himself under house arrest for his antics during Captain America: Civil War. As his sentence nears its end, Scott is pulled back into his alter ego when he receives a message from Janet Van Dyne, the original Wasp and Hope's mother. Janet is still alive in the quantum realm, but time is running out to save her.

After the doom and gloom of Infinity War, Ant-Man and the Wasp was just what the doctor ordered. It is (mostly) a stand-alone film in the MCU that ratchets up the humor that makes these films so much fun. Paul Rudd is perfectly cast as Ant-Man and his deadpan humor serves the character brilliantly.

After being a bit of an afterthought in the original film, Evangeline Lilly spreads her wings both literally and figuratively as the perfect partner to Rudd's Ant-Man. From the small amount of interaction that Scott has with the rest of the Avengers in his previous two appearances, it's clear that his comic relief will surely help to balance the next film. It will be interesting to see how Hope is able to establish herself among the larger group of heroes if this ever comes to fruition.

While there are plenty of laughs in the film, there is also plenty of action, complete with two separate chase sequences. With the power to shrink and enlarge objects, a chase sequence in an Ant-Man film is truly a spectacle to behold and these sequences do not disappoint.

There are also two complete storylines that help to progress the events within the greater MCU. The first involves Ghost and the experimentation that S.H.I.E.L.D. used her for in their greater pursuit for power. This ambiguous nature of S.H.I.E.L.D.'s mandate is one that has been propagated on both the big screen and on TV. I have a feeling that the next phase of the MCU will deal heavily with the blurring of lines between good and evil.

The other storyline that is truly compelling is that of Hope's parents, Hank and Janet Van Dyne. They were the original Ant-Man and the Wasp and not only do they complete a passing of the baton here in the film, but they bring up an interesting concept that might be explored in future films. What happens when superheroes retire?

Given the main cast's indication that they want to leave their heroes behind, how will the MCU handle their departures? Will they simply be killed off, or will they pass the baton to a new hero? The comics have handled these situations in a myriad of ways, so it will be interesting to see how the MCU approaches this ever-changing lineup of superheroes.

Up until now, Marvel has churned out mega-hit movie after mega-hit movie, but can they continue to perform at such a high level? While the Ant-Man films might not have been mega box office hits like the rest of the MCU films, they both turned a healthy profit and provide a roadmap for smaller MCU productions in the future.

Ant-Man and the Wasp is a great film that truly shines on 4K UHD. The scenes in the quantum realm truly jump off of the screen thanks to the HDR and added color spectrum. The Dolby Atmos audio track is another upgrade that helps to add texture to the chase sequences as well as the climactic scenes in the film.

Like all MCU films, the 4K Cinematic Edition and the Multi-Screen Edition are packed with an assortment of cool special features. In particular, the gag reel and outtakes never disappoint on a Marvel film. There's a whole outtake feature of Stan Lee improvising various one-liners for his scene that is a must-see.

All in all, Ant-Man and the Wasp is a wonderful film that the whole family will enjoy. It also helps to heal the wounds left from Avengers: Infinity War by reminding us that no matter what happens next Spring, there will be entertaining Marvel films coming our way for the foreseeable future.

Ant-Man and the Wasp is now available on 4K UHD, Blu-ray and DVD.