Review: 'Ralph Breaks the Internet' is a big hit 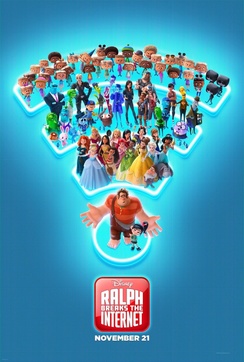 I certainly didn't envy the filmmakers of Ralph Breaks the Internet: Wreck-It Ralph 2. They had to somehow come up with a follow-up to the incredibly witty and original Wreck-It Ralph without being too derivative or worse, boring. My concerns were misplaced however as not only did they deliver a film that is every bit as fun as the first one, but also an original story that builds upon the world created in Wreck-It Ralph.

When the credits rolled on Wreck-It Ralph, I didn't know what to expect from the inevitable sequel, but the end result was as much a surprise to me as the original film. In Ralph Breaks the Internet, Vanellope's game is broken and on the verge of being sold off for parts. Ralph comes up with the idea to surf over to eBay on the newly installed wifi and buy the replacement part to save Vanellope's game, but he quickly finds that the Internet is filled with many pitfalls.

While the original film was very much a story revolving Ralph's existential crisis as videogame baddie, Ralph Breaks the Internet is Vanellope's chance to shine in the spotlight. She too is going through a bit of an existential crisis that comes to a head when her broken videogame literally threatens to wipe her out of video arcade forever.

And yet, the seeds for Vanellope's desire for something more actually stem back in the first film where the glitchy racer stands apart from her peers. While this characteristic allowed Vanellope and Ralph to bond as friends in the first film, it provides the launching point to this film in a way that I never expected.

From the trailers, it would seem that this sequel would simply be more of the first film set in the comedy-rich environment of the Internet. While this is certainly true, Ralph Breaks the Internet doesn't simply go for the lowest-hanging fruit, but actually addresses some of the perils of cyberbullying and the unchecked cesspool that is the comment section.

Beyond that though, the film really shines when it gets a chance to take its 2D animated characters and give them a fully-rendered 3D personality. For example, Vanellope is given dreams and aspirations that one wouldn't normally associate with a videogame character. Likewise, Ralph continues to learn and grow in his friendship with Vanellope and what it means to be a true friend.

Of course, that's what Disney does best. They are supremely talented in presenting positive values and life lessons in the shroud of highly entertaining stories. With Ralph Breaks the Internet, they continue to show that they are capable of taking a limited concept and expanding to fill a feature-length film.

I was fortunate to review the 4K UHD version of the film and modern animation is tailor-made for this new format. Not only does the film shine on 4K, but the detail is superb, especially in the dark web scenes where the HDR takes center stage to present robust blacks that you just don't get on the Blu-ray.

The Dolby Atmos track is a nice companion on the 4K UHD as it provides a rich texture to match the upgraded visuals. In several sequences, especially during the climax, the Dolby Atmos track gives a more robust and deep audio experience that augments the enjoyment of the film.

The included special features truly make the 4K UHD version the ultimate edition of the film. There are several featurettes and deleted scenes that provide many hours of additional enjoyment. My kids were quite exhaustive in watching every single one over and over again. If you have kids, you will understand.

Finally, I do have to end on the one aspect of the film that was the biggest shock for me - how much I enjoyed the Disney princesses. Sure, the first trailer includes the princesses scene and various Star Wars sequences that highlight the synergy that Disney is able to enjoy with all of their properties, but what I thought would be a throwaway laugh was anything but.

I won't say more as I don't want to spoil the discovery for you, but suffice to say they truly did add more than a fun touch to the film. Also, it was neat that all of the living Disney princesses save for Mary Costa (Princess Aurora) reprised their roles for the film. Mary had to decline due to her age, but it was a nice little touch that added to the films authenticity.

Ralph Breaks the Internet is one of those rare animated sequels that could actually stand alone and work without seeing the original film. Of course, it's much more enjoyable if you've watched Wreck-It Ralph, but I can't think of higher praise for a sequel than to say that audiences coming in dark would love it just as much as diehard fans.

Ralph Breaks the Internet is now available on 4K UHD, Blu-ray and DVD.