Review: Gaspar Noe's 'Climax' is a more than a mind trip 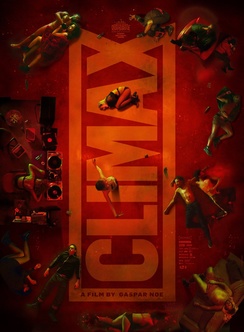 When you say the name Gaspar Noe, you undoubtedly get one of two reactions. Either he's a brilliant visionary director or he's a kook. There really is no middle ground when it comes to this divisive French filmmaker who excels at taking pages out of the playbooks of auteurs such as Kubrick, Lynch and Argento.

So, it's not surprising that early on Noe's latest Climax we find a direct, literal homage to Argento thanks to a VHS copy of Suspiria lying around. Noe is many things, but an ABC filmmaker is not one of them, so it should probably not be too surprising that he runs the end credits before the film starts. As I said, he's a divisive director and you either love or hate him. I happen to find him fascinating and Climax was another testament to heights and lows this gifted filmmaker is able to take the medium.

Set in 1996, Climax follows a new French dance troupe that is rehearsing for a massive tour in the United States. The last rehearsal turns into an all-night party and the dancers really let loose when they realize that their sangria has been laced with LSD. What starts as an ascension to Heaven quickly turns into a more hellish landscape when the drug and the dancers' passions erupt into violence.

Much like many of Noe's films, it's really hard to pigeon-hole them into one particular genre and I found it difficult to try and use one to describe Climax. I mean, sure, at its basest level, it is a horror film, but to call it simply a horror movie would cheapen the experience. There's so much human emotion and buildup throughout the movie that it would be sacrilege to lump it in the same group as your slasher-of-the-week.

No, in much the same way that calling Suspiria just a simple horror film would shortchange that movie, so to would it take away from Climax's impact. Sure, there are horror elements to it, but it's more of a psychological thriller filled with suspense. Quite frankly, it is a rather raw and scathing look at the human experience of a very particular subset of people (dancers) in a situation that has gotten way out of hand.

I say this because I do have a wee bit of insight into this culture during the time period of the film. No, I wasn't dating a French dancer in the mid-1990s, but back in school, I was dating a ballet dancer during this exact time period and let's just say that this film resonated quite strongly with me and the culture that I was exposed to at the time.

I can't say that I was ever involved with an orgiastic rave that ended in a killing spree, but I wouldn't have been surprised if I had either. I can tell you that many of the petty differences and insecurities that were present in the movie were indeed played out in real life. I mean, my girlfriend at the time was a young woman that sort of ran me over with my own car. It's a long story and not one fit for this piece, but it does offer insight into the rare and fragile culture that exists in the world of high-end competitive dance.

Anyhow, she and her fellow dancers were some of the most interesting and lurid people on campus and while I'm certainly happy to have shared a brief moment in their lives, I'm also a wee bit thankful that I survived with all of my limbs intact. Several of them went on to great success in dance circles as well as Hollywood and I'm left to wonder if this culture is, in fact, conducive to the creative lifestyle. We hear about tragedy striking the young people in this industry almost every day and it's a fine line between brilliance and excess.

This fine line is precisely where Climax approaches and then crosses as the movie gears up for his violent conclusion. What was once an ascent to the divine, spurring on their creative juices, just as quickly turns into the proverbial boogie man that takes it all away from these young dancers. It is a fine line indeed and that's most likely the message the Noe is trying to drive home.

Of course, Gaspar Noe uses his distinct visual style grounded by an electronic beat to convulse the viewer into a state of understanding. Many people might not appreciate his efforts, but again, this is where we get into the whole taste thing. I understand Noe is not for everyone and if you've been put off by him in the past, there's little here to suggest that you will suddenly have a calling to enjoy his work. Likewise, if you're a fan, Climax is another installment in the genius filmmaker's visual style that will leave you quite breathless at the end.

Climax is a film that I enjoyed tremendously and one that I would queue up as part of a double-feature with the new Suspiria remake. Both films evoke that Argento mystique and tread similar ground with the whole dancer thing. If one thing is clear, it's that the passion and determination required to succeed in the high-stress competitive world of dance could very easily teeter into the abyss of the unknown with disastrous consequences.

Climax is now available on Blu-ray and DVD.