Review: 'The Man Who Killed Don Quixote' is brilliantly mad 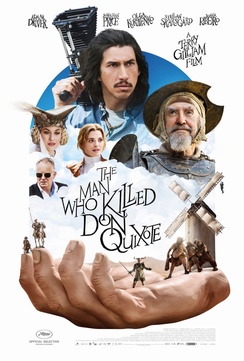 Terry Gilliam is a genius. Even if you take away his Monty Python catalog of work, he still has an impressive resume including Time Bandits, Brazil, The Adventures of Baron Munchausen, 12 Monkeys and Fear and Loathing in Las Vegas. Of course, many of you reading this probably haven't seen half of those films or know what Monty Python is. Do yourself a favor and go back to these pillars of modern comedy and take notes.

Terry Gilliam certainly has a unique visual style and his films usually require the audience to become active participants on the journey. He just has a knack for storytelling and that couldn't be any more evident than in his latest film The Man Who Killed Don Quixote.

The movie follows a commercial director that is reaching back to his roots and a student film about Don Quixote to inspire a vodka commercial. Facing shooting frustrations and doubting his calling, he re-visits the small Spanish town in which he filmed his earlier film a decade ago. He learns that his little film has had quite an impact on the town with the biggest being that his lead actor truly believes that he is now the mythical Don Quixote. The shoe-pedaler turned actor believes that the director is his Sancho Panza and the pair set off for a host of wild and wacky adventures.

The production of The Man Who Killed Don Quixote is one of those sordid tales of Hollywood that will enjoy its own immortality thanks to the quixotic path that Terry Gilliam took to realize his vision. In fact, the film opens with a title card that presents the film thusly, "And now, after more than 25 years in the making and unmaking... A Terry Gilliam film."

That's right, Terry Gilliam started working on the film back in 1989 and the title would prove more accurate than anyone could predict as not one, but two different actors cast as Don Quixote would die before they could bring the classic character to life. In fact, the almost 30-year odyssey would actually spawn two documentaries about the failed making of the film (Lost in La Mancha and the upcoming He Dreamed of Giants) before the finished product would finally make it into theaters.

After thirty years of buildup and anticipation, did the final product live up to the hype? In a word, yes.

As I mentioned, I grew up with Terry Gilliam's films and Monty Python, so I'm a huge fan. However, I can accept that his unique visual style and storytelling techniques may not be everyone's cup of tea. That said, if you're looking for something "completely different" as they used to say, then The Man Who Killed Don Quixote is the film that you should seek out this week.

First, I think that the delays ended up being a blessing in disguise. I mean, it allowed Adam Driver to be born for one and having him in the role of Toby the director was sheer brilliance. I kid a bit as Driver was an old soul in the body of a five-year-old when Gilliam commenced down this path, but I thought his portrayal was spot on and he continues to demonstrate why he's among the most talented young actors working in Hollywood today.

The original Toby was slotted to be played by Johnny Depp, and don't get me wrong, I think he would have brought his own spin to the character, but there's just something about Adam Driver and how he owns the role. Given the proximity to the release of Fear and Loathing in Las Vegas, had the original attempt succeeded, I fear that many would have seen Depp's Toby as simply an extension of his Raoul Duke. There's nothing wrong with that per se, but I think it would have been too easy to slip into that and it would have robbed us of Adam's nuanced and innocent take on Toby.

The story too has taken a bit of a turn over the years as well. Originally, The Man Who Killed Don Quixote was going to have actual time travel involved, but the final movie only approximates time travel through very specific plot devices and settings. Overall, this decision adds the madness that is inherent in any telling of Don Quixote.

When I was in school, we had to take fine art elective and I found myself in a course entitled "Plays in Performance." What can I tell you? The music appreciation class felt like an advanced foreign language class to me and I dropped it like a hot potato. Anyhow, our professor was obsessed with the musical "Man of La Mancha" so we got more Don Quixote in that semester than required in a dozen lifetimes. Suffice to say, I'm very familiar with the story of the man who tilts at windmills.

While the story is ripe for any number of interpretations concerning mental illness, the natural order of aging, or the place of dreams in a world becoming increasingly defined by science, among others, the way that Terry Gilliam transposes the very modern feeling of failing to live up to expectations is brilliant. In fact, there are several points along the way where it's obvious that Toby and Don Quixote are poking fun at the director's own madness in finally getting the film made. There's a whole discourse between Toby and the Boss about the plot to wit Toby remarks, "There's a plot?"

In any Terry Gilliam film, the plot is always secondary. He is a natural-born storyteller that excels in creating visual masterpieces. He is on the top of his game in The Man Who Killed Don Quixote and it's a visual journey that every cinephile should take. Does it all work? Of course not, but that's not the point. The point is that we all should embrace our inner Don Quixote and live each moment to the fullest. While Don Quixote may never die, our time on this planet is very much ruled by a ticking clock and we must seize the moment to live our best life possible. Trust me, watching The Man Who Killed Don Quixote will definitely help you reach that goal.

The Man Who Killed Don Quixote will be available on Blu-ray and DVD on June 4.