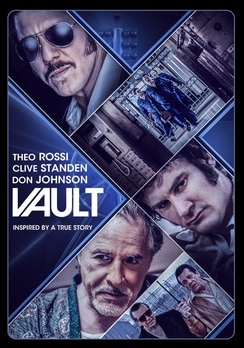 There's just something about the 1970s and mob movies that captures the imagination of American audiences. Films such as Goodfellas, Casino and the Godfather movies romanticize organized crime and tap into our collective consciousness of a bizarre decade.

Let's face it, the 1970s were weird and that's probably the nicest way that we can describe that time period. As disco, the Vietnam War and Watergate helped to shape the culture around us, the growing unrest in a particular part of society often led to the lawlessness that echoed shades of Al Capone and the wild, wild west.

It is within this environment that a real-life mob heist seemingly took place and no one noticed. The Bonded Vault heist is merely a footnote in organized crime circles these days despite being one of the largest heists in American history with a score said to have been worth $30 million then (about $140 million now).

Until now, the Bonded Vault heist has not been told on celluloid, but Vault aims to change that. The film tells the story of two small-time crooks who get caught up in the Providence, Rhode Island mob scene when they do a stretch for a robbery gone bad. Once released, they hatch a plan to rip off the mob and in doing so, they bite off more than they can chew.

Let's face it, mob films set in the 1970s are a special genre of American movies that usually resonate well with audiences. Whether it's the glamour or the gore, there's a veritable cottage industry built around these classic mafia tales. While Vault has all of the ingredients for a killer mob film, there's just something off about it that prevents it from reaching its potential.

That's not to say that Vault is a lousy movie. Quite the contrary, it is a movie that will hold the attention of mafia film fans long enough to reach the payoff, while also capturing those people seeking a more Bonnie and Clyde atmosphere. Personally, I think a more direct heist film would have served the source material more faithfully and been more fulfilling, but there is something entertaining about Vault that sets itself apart from other mob flicks.

In many ways, Vault is two films combined into one. You've got the straight-forward heist film that would make a compelling story in its own right and then you've got an interesting Bonnie and Clyde story between Deuce and Karyn. Played expertly by Samira Wiley, Karyn is a character that you rarely see in mob movies. Most often relegated to absent-minded housewives or fiery mistresses, female characters usually don't get fully realized character arcs in these type of films.

Wiley's depiction of Karyn probably comes as close to Sharon Stone's radiant performance in Casino as any other that I have seen in this oeuvre. Karyn is a strong-willed woman who is in constant conflict with her morals and her undeniable attraction to Deuce. The first half of the film is basically dedicated to their budding relationship and it certainly pays off in the third act, but there's a bit of disconnect between these scenes and the heist sequences.

The actual heist plays out just as you would expect, hitting all of the tried and true (and tired) mob heist clichÃ©s, but the familiarity actually works in its favor. Let's be honest, before watching this film, no one was familiar with the Patriarca crime family or the thriving mob activity in the Union's smallest state. So, by following a more relatable ABC double-cross storyline, Vault is able to sidestep the more nuanced nature of the actual crime.

Don Johnson's Gerry is an invention in the script and not only does the character provide the perfect foil to Chazz Palminteri's crime family head Raymond, but it's some of Don Johnson's best work in years. The true story behind the movie actually involved Raymond being the mastermind behind the double-cross of the thieves on the outside as retribution for perceived slights within the crime family, but having the whole miffed outsider who is never given the opportunity to be completely accepted into the family is a compelling storyline.

Again, this animosity between Gerry and Raymond plays out well, especially in one particular scene, but the interplay gets lost around the other points in the storyline. Had the heist itself been a complete film, there would have been more time to develop this fictional arc that really would have elevated Vault into a classic mob tome.

As it stands, there are compelling moments in the film and the story is rather faithful to the actual events from the real heist. While the story of Deuce and Karyn has been expanded and romanticized for the screen, these revisions mostly help Vault to be more entertaining. Unfortunately, it just feels like two movies slapped together and most of it works, but the parts that don't are quite glaring.

Still, it is a rather enjoyable film with some exceptional performances that highlight a little known part of the real mafia world. For that alone, Vault is definitely worth a watch.

Vault is now available on Blu-ray and DVD.