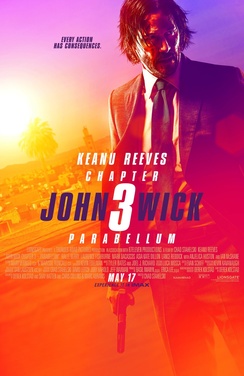 I don't know whose career renaissance is more surprising, Keanu Reeves' or Liam Neeson's. Both actors have enjoyed a little later in life success via the geriatric action route, but I suppose Liam's is more impressive given that he was new to action and full two years older than Keanu is now when Taken came out.

That said, the success of the John Wick films should not be discounted. Keanu Reeves is well into his 50s and he is still very much believable as the indestructible assassin for hire and with no end in sight, I think it's very possible that Keanu may be playing John Wick into his 60s.

This week, the latest entry in the franchise John Wick Chapter 3: Parabellum debuts on home entertainment and it pretty much picks up right where Chapter 2 leaves off. John finds himself in a state of excommunicado from his shadowy underworld of assassin contacts and the high table has placed a worldwide $14 million bounty on his head. Will someone be able to collect the bounty? Will John be able to make things right with the high table?

Keanu Reeves was able to replicate the success of the first movie in the sequel and I am happy to report that he has once again managed to surpass our high expectations for the third installment. If you compare this franchise with his earlier Matrix series, you start to get an idea of where they went wrong the first time. The Matrix ambitiously tried to outdo one another and opened up the world to all sorts of crazy scenarios that ultimately all collapsed by the end of the third film.

In John Wick, the filmmakers have decided to keep it simple and honestly, all three films follow the exact same playbook. John Wick has been wronged. People try to kill John Wick. John Wick kills a bunch of people and enacts his revenge. Rinse and repeat. I really can't wait until he visits the Moon Continental in Chapter 4.

All kidding aside (although how cool would it be to have John Wick in space?), the series works so well because despite being the same movie told in three different ways, it does expound upon its mythology slowly and it presents increasingly more difficult situations from which John Wick must survive.

In the last installment, the series shifted to Rome, while a part of Chapter 3 takes place in Casablanca among the deserts of northern Africa. Again, it's all about restraint as you remember that the entire plots of all three movies have taken place over roughly three weeks. Poor John Wick is not only dealing with numerous stab wounds and bullet holes but now he's got to deal with jet lag too. But he manages to come away from it all mostly unscathed. If you consider that a spoiler, then I don't know what to tell you. The films are called John Wick and they announced that Chapter 4 is coming out in 2021, so it's not hard to connect the dots.

Of course, you would think that such a predictable ending would soil the movie and yet the franchise is stronger than ever and there's no end in sight. That's the true brilliance of John Wick that it shares with the classic 1980s slasher flicks. You know that no matter what happens Jason or Freddy will always pop back up in the next film. It just became a greater stretch of the suspension of disbelief to reset the status quo each time.

As we expand the John Wick universe, the filmmakers are stocking their world with talented A-listers that somehow fit into the environment as if they were along for the ride the whole time. This time out, the newcomers are Halle Berry and Anjelica Huston and they add a level of authenticity in a world that is increasingly becoming more male-dominated.

While both women excel in their roles, I was completely blown away by Anjelica Huston. It's been a hot minute since she has starred in a big-budget Hollywood film and she hasn't lost a step. In anything, age has only given her a certain countenance that gives her character a certain sneer that only helps to carry the film through a potential hiccup.

The other thing that I have always been impressed by with these John Wick films is the sheer amount of extra goodies that they cram onto the discs. This isn't some sort of vanilla movie-only Blu-ray, no this is a jam-packed collection that really allows you spend hours down the John Wick rabbit hole long after the film's credits have ended.

There no fewer than 10 featurettes that cover everything from "Dog Fu" to "The Legacy of the High Table" to in-depth looks at the horse and motorcycle sequences. This is another trait that this franchise shares with Keanu's earlier sci-fi opus. I recall the treasure trove of features on The Matrix DVD.

This added value only incentivizes the need to own John Wick Chapter 3, as if that was really debatable. This series continues to fill a very specific action niche in my soul and I hope that these films continue on for the foreseeable future.