Review: 'Legends of Tomorrow: Season 4' is a raucous ride through time 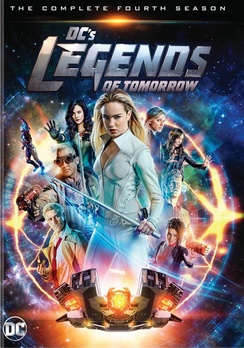 It's funny, for every misstep that DC makes on the big screen, they continually deliver satisfying entertainment on the small screen. A lot of that success certainly falls in the hands of uber producer Greg Berlanti and his Arrowverse stable of TV shows on The CW, but it's like he has the Midas touch and it doesn't appear to be dissipating anytime soon.

In Season Four, the Legends of Tomorrow join the Time Bureau to travel through time to save the world and their legacy from magical creatures that have been unleashed onto the timeline. As the Legends time-travel across historical events and meet famous figures, they have to contend with an unprecedented level of magical craziness.

I have to admit that I am sort of late to the party here, but I'm all in. This screening copy of DC's Legends of Tomorrow: Season Four was my first prolonged exposure to the series. What can I say? There are only so many hours of TV watching to go around.

As a regular watcher of many of the other Arrowverse shows, I was certainly aware of many of the characters here, but I wasn't truly prepared for the epiphany that is Legends of Tomorrow. I would say that this season (at least) is an odd mix of Timeless and Warehouse 13. If you even remotely liked either one of those shows, then you might want to check out Legends of Tomorrow.

Once you get beyond the ludicrous setup of magical mythical creatures being deposited throughout our timeline, the show really starts to open up and the tension ratchets up a level or two. While there is a certain amount of dramatic anchoring in the other Arrowverse shows, Legends of Tomorrow really swings for the fences.

So, whether it's a homicidal unicorn at Woodstock or a serial killing puppet in New Orleans, the fantastical adventures consume you. It all comes together thanks to a wonderful and diverse cast that clearly buy into the frivolity. In particular, Brandon Routh and Dominic Purcell deliver wonderful performances in this season.

Unlike many TV seasons, DC's Legends of Tomorrow: Season Four is packed with a variety of extra goodies. As you'd expect that gag reel is hilarious and the featurette "Legendary Storytelling" does an admirable job filling in highlighting everything that comes together for the series to thrive as it does.

Perhaps the most fun aspect of this season is just how accessible it is. As I mentioned, I reviewed it sight unseen and it didn't take me long at all to pick up the various ongoing storylines. It also motivated me to go back and start the series from the beginning so that I can see all that I have missed.

Whether you're a diehard fan of Legends of Tomorrow or a noob like me, you will find great value on this offering and I absolutely recommend watching it as soon as you can. You'll laugh. You'll cry. You'll lose a nipple - well, hopefully not.

DC's Legends of Tomorrow: Season Four is now available on DVD and Blu-ray.