Review: 'Scary Stories to Tell in the Dark' is a hit for the tween set 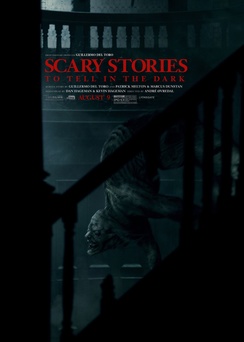 As you know by now, I was a massive fan of horror films from an early age. It probably stemmed from their surge in popularity during the 1980s when I was in that tween space where I was too old for Disney movies, but probably too young for the horror films that I craved.

Of course, this was also the rise of the VCR and our family was an early adopter and we were blessed with a video store on the corner. During the long summer months, it wouldn't be unusual to make multiple trips to the video store each day looking for more ways to scare me senseless.

I was also an avid reader and when the Scary Stories to Tell in the Dark books came out, I was hitting my stride in their targeted demographic. I absorbed those books usually in a single day and constantly re-read my favorite stories. I was young and the concept of an anthology of stories was novel to me, but I thoroughly enjoyed their pint-sized servings of terror.

Fast forward 30 some odd years and genre filmmaker Guillermo del Toro was producing a big-screen adaptation of Scary Stories to Tell in the Dark and I was more than intrigued. It seemed like a match made in heaven and I was cautiously optimistic that the adaptation would blend the right amount of horror with nostalgia.

For the film, the filmmakers created a mechanism to present the anthology of tales that centers around a small town in 1968 and a mysterious house belonging to an old family. It seems that a young girl from that family wrote a book of horrific tales and her ghost is lingering around waiting for the right group of kids to experience her stories in real life.

My kids are six and eight and are definitely too young to watch this movie, but they have shown a penchant of following in their old man's horror footsteps. Recently, we took them to their first haunted house - one designed for kids, but still with enough jump scares to approximate a real haunted house - and they loved it. It won't be long before we are watching horror movies as a family, but they are still a bit on the young side and impressionable, so we will be taking it slow.

I had a fleeting thought that they might be ready to see Scary Stories to Tell in the Dark given that the original books were marketed to the tween set, but after wise counsel from my wife, I held off. It's a good thing that I did because had they watched it, they would have had nightmares for months.

The PG-13 rating is well earned and for those kids not old enough to get into It: Chapter Two, Scary Stories to Tell in the Dark is a safer alternative that will lead to fewer nightmares and psychologist bills when they are older. I would definitely recommend you scan the film first before making the decision with your own children because everyone has their own tolerance level and your mileage may vary.

The cast features mainly faceless actors that you probably haven't seen before (and that's OK) and Gil Bellows. They all turn in worthy genre performances and serve the audience well in getting their chills and thrills. The real superstar is the tone elicited by director Andre Ovredal who relies heavily on the menacing score from Marco Beltrami and Anna Drubich to ratchet up the tension throughout the film.

I've always been a big believer that it's not the jump scares that deliver the biggest payoffs in horror films but the progression of tension within the viewer. A great horror film will gradually increase the tension until you can't take it anymore and then play with your emotions during the climax until it's safe to breathe again. Scary Stories to Tell in the Dark establishes a wonderful tension in the audience that builds and pays off handsomely from time to time.

I think the choice of setting the film in the late '60s was genius as it harkens back to a simpler time before the Internet and cell phones. This high-water mark of horror settings is used both practically and metaphorically in building the storyline. The framing mechanism of the film introduces the very real horror of the Vietnam war to the story to give the movie a bit more gravitas.

Naturally, given the book series and the natural anthology format of the film, Scary Stories to Tell in the Dark sets itself up for several sequels like any good horror movie worth its salt. The film performed admirably in theaters and should turn a decent profit on home entertainment considering that people are still in the mood to be spooked despite the passing of last week's Halloween holiday.

Scary Stories to Tell in the Dark is now available on 4K UHD, Blu-ray and DVD.