Review: 'The Kill Team' bloodies the line between right and wrong 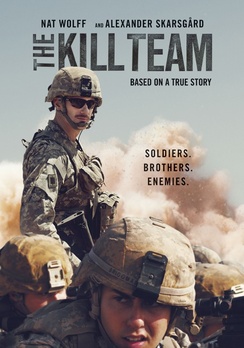 War is ugly. War is brutal savagery. And War results in untold casualties on both sides of any conflict. The wounds inflicted in combat include both the finite in terms of death and the infinite in terms of mental anguish for those affected by the events they witness.

Back in 2013, I watched a horrific documentary called Kill Team about a platoon of soldiers over in Afghanistan who crossed the line and murdered innocent civilians. As terrifying as the events of the movie were, it really forced me to ask the difficult questions. Does growing up in a world of non-stop toxic violence with instant access to tomes on the brutality of war such as Full Metal Jacket and Platoon create a never-ending spiral of violence? Or are some people just predisposed to a violent nature that gets exacerbated by the realities of war?

Off the top, I should probably state that I do believe that armed conflict serves a purpose and that while I would never be good at it, I have nothing but the utmost admiration and respect for those who serve our country. The bravery and selfless dedication they exude on a daily basis is a reminder that we live in a great country. And yet, there has to be a line somewhere. As sure as I am that Jack Nicholson committed a crime in A Few Good Men when he spouted his infamous line, "You can't handle the truth," I am positive that this line between right and wrong is what separates us as a rule-abiding republic from the tyranny of a power-hungry aristocracy.

This version of The Kill Team is a fictionalized dramatization of the events of the 2013 documentary directed by the same guy. It tells the story of a young soldier who is conflicted when his platoon starts killing innocent civilians under the direction of a sadistic leader.

While only those that were there in Afghanistan can attest to the veracity of the film's story, it does appear on face value that Dan Krauss captured many of the events depicted in his earlier documentary. Naturally, names have been changed and some characters have been combined to make for a more compelling story, but several of the same moral implications resonate through the new film.

The dramatic version of The Kill Team creates a more black and white issue with clear moral directives and sides. I can only imagine that the moral ambiguity that the young soldier caught in the middle felt on the ground in Afghanistan was far more in the shade of gray. The armed forces drill subservience into their culture. In fact, that's the only way to ensure that such a large community with such a diverse membership could survive, especially in the midst of wartime.

And yet, despite everything that has been taught and drilled into them, each soldier has their own moral compass and that too is an imperative driving force within each branch of military service. Our humanity and compassion as human beings is what separates us from other animals and these traits are perhaps even more important in the face of violence.

But that doesn't make the decision to stand up to your direct supervisor any easier. In fact, I think the original documentary does a better job capturing this thin line of morality with the splicing of interviews of other platoon members throughout the film. For dramatic purposes, the new version makes the decision a wee bit easier for Nat Wolff who plays Andrew Briggman.

Speaking of Nat Wolff, it was really eye-opening to see him in such a dramatic role. Up until this point in his career, my only real interaction with him has been through his teen comedic efforts in both supporting and lead roles, so I was rather impressed with his performance.

To put Nat's performance into the proper context, he was delivering it mostly opposite of Alexander Skarsgard who is quickly becoming one of the most adept young actors of our generation. He has such a great range, but Alexander seems to shine most when he's set up as the bad guy and he really relishes his moral ambiguity as Sergeant Deeks.

Overall, I found the film to be an interesting entry into the whole moral conceits of war conversation, but I thought the director pulled his punch a bit. Dan Krauss' documentary was far more convincing and drove the point home in a way that I think the fictionalized version never fully realized.

That said, I do think that this version of The Kill Team is far more accessible, especially to those that might not enjoy the conventions of serious documentaries. And anytime a film is able to broaden the discussion about a topic that is so vital, especially in today's political landscape, its value can't be overstated.

During a rather slow period in home entertainment, there is a lot of merit to checking out The Kill Team, which is new this week on Blu-ray and DVD.