Review: 'Knives Out' will keep you on your toes 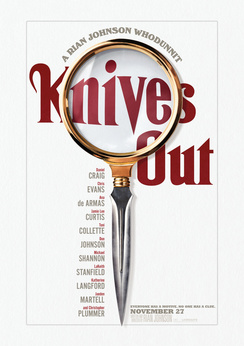 I consider myself quite the connoisseur of whodunnit murder-mysteries. I've probably seen thousands of movies and read almost as many books on the subject. It's gotten to the point where I've become numb to many of the genre's tricks.

I'm not trying to say that to brag, but the tried and true genre is known for certain plot twists and buried clues of misdirection in the first act that turn out to be fool's gold by the time the plot is unraveled. Of course, telling the difference between red herrings and genuine clues is part of the fun for armchair sleuths and it's why these types of films continue to enjoy the rave reviews that they receive.

Rian Johnson's Knives Out is the exception to the rule. You know going in that Johnson is going to try and hoodwink you at every turn, yet he is somehow still able to get away with it. I may be jaded, but in a post-Sixth Sense world, there are very few movies that truly can keep me guessing, or at least do so without me stretching the bounds of suspension of disbelief to its breaking point.

Knives Out is a movie that continually challenges you to look for the next twist and latest plot reversal, only to trick you into believing that you should have known whodunnit all along. That is the true hallmark of any good whodunnit, or any movie really. It's a complex plot that upon second viewing holds up both to the presuppositions of the first viewing as well as to the gained knowledge of the second viewing.

Renowned crime novelist Harlan Thrombey (played brilliantly by Christopher Plummer) dies under mysterious circumstances following his 85th birthday and every member of his dysfunctional family is a prime suspect. Enter equally renowned detective Benoit Blanc (Daniel Craig) who has been mysteriously contracted to solve the murder and he will not rest until the killer is brought to justice.

If you're getting serious Agatha Christie vibes, then you're not alone as director Rian Johnson has come out and confirmed that Knives Out is an homage to Christie's style of thrillers. In many ways, you could swap the gothic-style mansion from Knives Out with the trans-continental train in Murder on the Orient Express and you would have two stories that perfectly complement each other. Forget any awards, I'm pretty sure that Johnson would deem this to be the highest praise for his film.

The hardest part about reviewing a movie such as Knives Out is that you are inherently limited to what you can talk about unless you are one of those soulless individuals that take pleasure from spoiling others. Thankfully, I'm not one of those people, so I'll make a concerted effort to give the film the kudos that it deserves without giving away the plot and all of the twists.

No discussion of Knives Out would be complete without recognizing the superb work from the amazing ensemble cast. There's plenty of A-list Hollywood heavy hitters in the film including Jamie Lee Curtis, Chris Evans, Toni Collette, Michael Shannon and of course, the aforementioned lead Daniel Craig. The fun thing about this potpourri of acting talent is that they are each given plenty of juicy plot to chew on and the movie is that much better for it.

In particular, it was quite exciting to see Daniel Craig step away from his serious acting persona in roles such as James Bond to create a whimsical and mysterious detective that is an instant cult favorite in the whodunnit world. He isn't quite up there with Hercule Poirot and Miss Marple yet, but give him some time and I think he could be, especially with the news that more Benoit Blanc mysteries are coming to the big screen soon.

Looking over Craig's acting resume, he hasn't stepped out of the serious roles often but when he does like in Lucky Logan and here, he is able to deliver excellent performances against type. I can only hope that he and Rian Johnson are able to milk the proverbial cow that is Benoit Blanc for many films to come.

One arresting performance that was unsuspecting but is certainly not flying under the radar is the one turned in by Ana de Armas. She was rightly nominated for the Golden Globe for Best Actress in a Comedy or Musical and she is able to match wits with both Daniel Craig and the rest of the talented cast at every step along the way.

Ana has been in a sprinkling of films of various genres in the last few years, but I only discovered her in Blade Runner 2049. Although, it was her turn in Knives Out that really made me appreciate the wide range of her acting chops. She is an absolute star in the making and I can't wait to see what lies ahead for the talented actress.

As it turns out, we won't have to wait long as Ana is set to be a Bond girl alongside her Knives Out co-star Daniel Craig in April's No Time to Kill. As you'll come to find out after watching Knives Out, this will definitely change up the dynamics between these two actors in a way that should be quite interesting.

Finally, no discussion of Knives Out would be complete without mentioning the spectacular bevy of goodies on the 4K UHD and Blu-ray. Rian Johnson is a filmmaker that has always embraced the physical format and as such, his releases are always packed with bonus features.

Not only do you get several deleted scenes and two commentaries featuring Johnson but the true highlight of the collection is the in-depth eight-part documentary that really dives deep into the film. There are also plenty of extra goodies along the way that really showcase the value in packaged media and will give the audience the content they crave.

The beauty in Knives Out is that it's not just a simple whodunnit, but rather a complex web of lies and deception that is brought to life by an amazing cast of characters. It's a story that lingers long after the credits roll and will have you itching to watch it again to see everything you missed the first time through.

The good news is that Knives Out holds up to multiple viewings and it continues to entertain even after you have the completed puzzle. That is probably the best selling point for this film. It's a classic mystery that will keep you guessing right up until the end. And even after it's over, you still might truly know all that is going on.

Knives Out is now available on 4K UHD, Blu-ray and DVD.