Review: 'The Unxplained' is a throwback treat 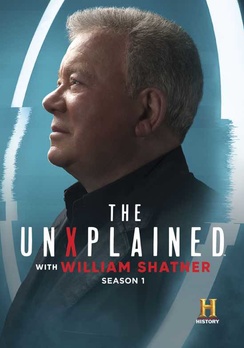 I have to say that I was genuinely curious when the opportunity to review The UnXplained: Season One came up. Ever since watching Unsolved Mysteries as a child, my curiosity was piqued about the unknown and unsolved, so this seemed to be right up my alley.

Of course, the History Channel is banking on its secret weapon to win over viewers, William Shatner. To be honest, I was never a big Shatner fan as I was more into Star Wars as a kid, but I've come to appreciate him more as I've gotten older. At this point, he's pretty much playing a caricature of his outsized personality and, with the exception of maybe Bill Murray, he's doing this better than anyone else in the world.

And believe it or not, he's the straw that stirs the drink that is The UnXplained.

The UnXplained: Season One tackles subjects that have mystified mankind for centuries. From Japan's ominous "Suicide Forest" to strange creatures like the Chupacabra to a city in Pennsylvania that has been burning for over 60 years, this show sheds a light into the dark reaches of our planet.

From the get-go, this show will grab the curious viewer with its retro style that will remind people of Unsolved Mysteries. William Shatner plays the role of Robert Stack to perfection. He is able to ooze his personality in between segments that are loosely tied together around a central theme.

The actual segments about the various unexplained things use testimonials from witnesses and experts, but it's Shatner that really resonates with the viewer. The crazy thing is that he probably only spent a day filming his interstitial pieces, but he just has a way of connecting the show and keeping it on the rails.

One of the more interesting things about this show was how it really became a generational hit for my family. It seems that my daughter inherited my obsession with mysteries and the unknown because she sat right there next to me as we reviewed season one. When we reached the last episode, she looked up to me with misty eyes and asked if that was all there were.

I replied that unfortunately there were no more episodes in season one, but the show recently returned for season two. Sadly, YouTube TV doesn't carry the History Channel yet, so we will have to wait and see if we get an opportunity to review season two when it comes out on DVD.

If you're like me though and The UnXplained is an unknown quantity, I implore you to seek out this DVD of season one. It is a well put together show and the interstitial anecdotes from William Shatner are the icing on the cake.

I would say that I was previously familiar with about half of the subjects in the first season, but I always found out something new. I consider myself to be pretty knowledgeable about the Winchester Home, but there were several things that I was educated on. I had no clue about Centralia, Pennsylvania before the show, but now I'm completely fascinated about this coal mine that has been burning for over 60 years.

The UnXplained: Season One is now available on DVD and it will definitely tickle your mystery bone.