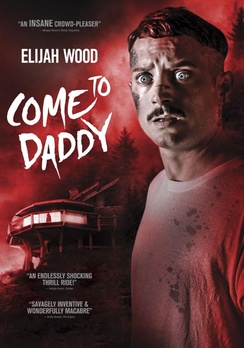 There's just something about strange films that stick with you. Whether they are good or bad is usually secondary, but they are some of the most memorable films that you will ever watch.

Thankfully, Come to Daddy is both strange and good, so even better.

A privileged man-child gets an invitation from his estranged father to come to his coastal cabin. Not only is his Dad a disapproving jerk, but his shady past is catching up with him and now his son is caught in the cross-fire.

The big seller here is Elijah Wood. Ever since playing a Hobbit, Elijah has been playing an increasingly bizarre cast of characters. However, there might not be a more bizarre one than Norval Greenwood.

Right from the start and his goofy bowl-cut haircut, you know that Norval is going to be one of Elijah's most iconic personas ever. There's just a certain naivetÃ© about Norval that really draws in the audience in a way that very few characters are able to successfully accomplish. And yet, this sense of innocence is quickly thrown into the fire.

Director Ant Timpson is a first time director and it might show a bit here and there, but that only adds to the charm. The story is so bizarre and out there that it really does take someone who is new to the scene to give it its proper due.

Just when you think you know where things are going, the plot does a 180 and you're left trying to catch your breath until the shocking end. I don't really want to talk too much about the twists and craziness but trust me, you have to see it to believe it. I was hoping for a weird film and I certainly got it.

In many ways I found that Come to Daddy shared many of the same spirits as other bizarre films that I enjoyed recently such as Green Room and Under the Silver Lake. All three films were surprising and I found their twists to be not only unique but also brilliant in the grand scheme of things. These three films were more than unexpected, they helped to set the bar higher for future strange films to hit.

If you're an aficionado of the macabre and bizarre, then you'll want to check out Come to Daddy. It is the perfect blend of strange and interesting that might not always hit on all cylinders, but it will definitely leave an impression on you. Sometimes that's a good thing and it's certainly good for Come to Daddy.

Come to Daddy is now availble on Blu-ray and DVD.