Review: 'The Grudge' misses its mark 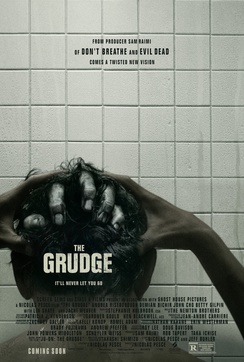 In a world were sequels, remakes and reboots dominate what's left of the box office after the comic book movies take their cut, it's easy to understand why studios would be keen to keep regurgitating the same crap over and over again, but at some point, we have to push back.

Today, I'm pushing back on The Grudge.

Don't get me wrong, I really enjoyed the original Japanese Ju-On series, but by the time they made that terrible American remake starring Sarah Michelle Gellar, the series was already starting to smell like one of the corpses in their films.

This remake, sequel, or whatever follows along familiar ground as a house is cursed after a grisly murder. Now, anyone who enters the house is similarly cursed and it's up to a young detective and her partner to solve the case before her family becomes the latest victims.

If the plot sounds familiar, that's because it's loosely the same plot as every single Grudge film. If there's one thing that the series has going for it is that it knows its audience well and doesn't try to mix things up too much. The only problem is that while this was fine during the first wave of Japanese horror remakes, but the jump scares and creepy girls crawling up walls are getting old.

One highlight of this new version is that they do something rather unique with their ghosts over the course of the film. They actually change from scene to scene, becoming more grisly as the plot unfolds. This helps to build a sense of dread and expectation that pays off in the film.

At first I thought I was imagining it, but after watching a featurette on it on the Blu-ray, I was impressed at just how much thought they put into it. As you can see in the brief snippet below, this is a cool effect that does leave a lasting impression on an otherwise forgettable movie.

I was really bummed that I didn't find much enjoyment in The Grudge. With the exquisite cast and involvement of Sam Raimi, I was actually hopeful that this wouldn't be the absolute trainwreck that it becomes.

Lin Shaye has become synonymous with the horror genre lately, popping up in franchise after horror franchise. I really don't have a problem with as Lin is a phenomenal actress and she has really finetuned her horror timing. She's got it down to a science here and she's one of the bright spots in the film.

Another casting coup was John Cho who is more known for his comedic work but demonstrates his range here. I was a bit unsure about his involvement, but he proves that my fears were unfounded. It's just too bad that the script failed to live up his potential to be an iconic horror character. Perhaps, he will get another chance to shine in a future horror film.

Ultimately, it becomes pretty clear early on that this franchise has jumped the shark. It recycles a lot of the same old tired tropes under the guise of paying homage to the series, but it really just comes off as lazy writing that leaves the audience wanting so much more.

The Grudge is available on Blu-ray and DVD and if you're a completist then you'll want to pick it up to finish your collection. Otherwise, I'd wait until it comes to cable or Netflix and save yourself some pennies.