Review: 'Infinity Train' is a mystery fit for the whole family 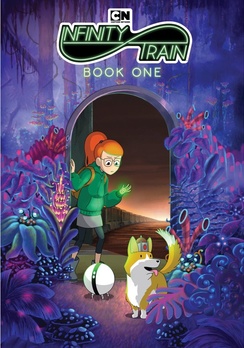 It's rare these days to find entertainment that we can all enjoy together as a family. With kids at 6 and 8, their interests are varied and most of their animated fare lately has been less than stimulating. I mean, come on, you can only watch so much Onion and Apple before you want to impale your eyes and ears on the nearest blunt object.

Some of the cartoons lately have been too advanced to hold the kids' interest or so shallow to keep the adults awake. But it seems that Infinity Train is the right mix of accessibility for children and pathos for adults to make it a hit for the whole family.

Infinity Train: Book One follows the story of a precocious young girl called Tulip who runs away from home and finds herself stuck on a seemingly neverending train. As Tulip struggles to find a way off of the train, she befriends several unique creatures on the train and realizes that she needs to work with new friends to solve the mystery.

Given that my introduction to this wonderful show came in the form of this review copy, I wasn't really familiar with creator Owen Dennis' work, but it's readily apparent that he's well-versed in the geek culture. He's about a decade younger than I am, but I would consider him a peer in pop culture.

I was fascinated by just how many influences they were able to play with over the scope of 10 short episodes. Oh yeah, did I fail to mention that each episode is only about 10 minutes or so? So, you can basically cram the entire first season, or Book as they called in the parlance in about just over an hour and a half.

Yet, despite the compact nature of each individual episode, it is surprising how much ground they cover in such a small amount of time. Trust me, I've seen slow-burning TV shows that get caught up in their own navel-gazing for so long that they lose their way.

Each of the three main characters have distinct fully-realized character arcs that both entertain and communicate valuable lessons about self and identity that young children should cherish. Think The Wizard of Oz set on the train from Snowpiercer. Of course, it's not so simple as searching for a brain or a heart, but the sentiment is still the same.

My favorite character is probably the existential One-One who has the best one-liners and such a dualistic view of things - all while searching for its mother. Both comic relief and the voice of realism, One-One is given a poignant episode about halfway through the season that reminds us that not everything has to be finished. It's almost like his obsession is mirrored from our own insecurities.

And speaking of mirrors, The Chrome Car episode is brilliant.

Also, One-One is the one that tells us that it's OK to cry. So many tears. Again, for an animated series aimed at older children, there is real pathos that one wouldn't necessarily expect from such a series. Maybe it's a byproduct of this quarantine pandemic, but it's been a long time since my kids were as immediately taken by a show as they were with Infinity Train: Book One.

Infinity Train: Book One will be released on DVD and Digital on April 21, from Warner Bros. Home Entertainment.