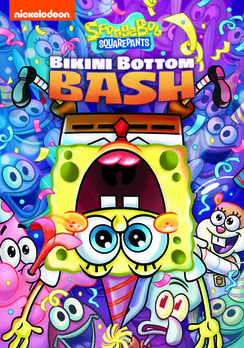 To that, I say that you have a good eye. Paramount previously released a VHS in 2003 with the same name - albeit with an exclamation point at the end - but they only share a single episode, "Party Pooper Pants." Although, to be fair, it seems that the episode has gotten a new moniker as "SpongeBob's House Party."

With this global pandemic one thing has become increasingly clear, it is imperative to find quality family entertainment for the whole family. My kids were becoming big fans of SpongeBob Squarepants recently, but these two home releases have kicked their fandom into overdrive.

SpongeBob Squarepants is a show that we all enjoy and it not only holds our attention, but also keeps our kids entertained as well. As the pandemic enters its second month, we are quickly running out of options, but SpongeBob never gets old and there is no shortage of episodes available.

While the overly simplistic nature of the show's comedy helps to explain its universal appeal, I can't help but think that its true appeal is a part of the cultural zeitgeist that defies explanation. It makes you truly appreciate the show's staying power over all of these years.

It's hard to find entertainment options that span generations, but SpongeBob Squarepants is one of those shows that can be enjoyed by parents and their children. The catchy theme song is the cherry on the sundae as it clearly is the best possible earworm that never gets annoying.

No one knows what the future holds, but the recently announced thirteenth season will only contain half of the normal episodes of previous seasons. Nothing can last forever, but SpongeBob SquarePants has achieved crossover success on the big screen and continues to tickle funny bones of both the young and the old.

My kids were rapt as we reviewed this DVD and they certainly hope to have SpongeBob in their lives for many years to come. Perhaps, some day they will be able to share SpongeBob SquarePants with their children.