Review: Daniel Radcliffe is on fire in 'Guns Akimbo' 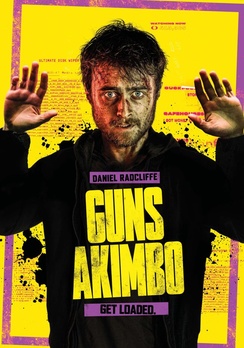 We're no longer in Hogwarts, kids.

At least that's the message that Daniel Radcliffe is sending to his fans and I, for one, couldn't be happier. More often than not, it's difficult for successful young actors to break out of their typecast and demonstrate that they are more than a one-trick pony. And yet, Daniel is blazing his own trail and the results have been spectacular.

Radcliffe stars as Miles, a nerdy game developer who gets caught up with a gang that is live-streaming death matches. Now, he's pitted against a brutal killer at the top of her game and all he has to defend himself are the two guns surgically attached to his hands.

If you thought that playing a flatulent corpse would be the oddest role that Daniel Radcliffe would ever play, you're probably right. But his role Miles in Guns Akimbo might be a close second.

Writer/director Jason Lei Howden might not have many entries on his resumÃ© but he hit a grand slam with Guns Akimbo. It's fairly obvious that Jason is a fan of the bombastic action flicks of the 1980s and as a child of the '70s, I had a smile plastered on my face from start to finish.

While Guns Akimbo has flown under the radar thus far, don't let its lack of fanfare dissuade you. If you're into the latest trend of ultra-violence, then you've met your latest obsession. While calling Guns Akimbo the latest homage to John Wick would be a disservice to both films, it's pretty apparent that they share many of the same sensibilities.

Thematically, Guns Akimbo might remind you more of Battle Royale or Death Race 2000, but the parallels to more modern violent films is readily apparent. But it's not all action and violence. Daniel Radcliffe's comedic chops are vastly underrated, but they are on full display here.

Waking up with guns surgically attached to your hands presents itself with several obvious impairments and they spend plenty of time milking them to its full potential. Whether it's trying to use your cell phone or using the bathroom, there's plenty of gold to mine in the situation and they don't miss an opportunity.

Of course, the biggest thrill in the film is the chase and the action is well done. The production value is on par with the biggest box office action flicks and it won't let you down. The release slate this week is extra thin but Guns Akimbo delivers a top-notch experience.

Given our voyeuristic tendencies as a society, it's not hard to visualize this dystopian future as being closer to reality than we are suspect. There are subtle swipes at the anonymous trolling nature of the Internet, but they are mostly window dressing for the main event.

As the two main combatants, Daniel Radcliffe and Samara Weaving excel in their roles as reluctant assassins. Samara turned heads in last year's Ready or Not and she only adds to her luster here. As Nix, she is a badass that more than holds her own in the male-dominated assassin world.

But the real star here is first and foremost Daniel Radcliffe. He has thrown away the shackles of Harry Potter and shown that he's more than just a boy wizard. A lesser actor would wilt under the pressure of having to shed an iconic typecast, but Daniel proves that he's more than just a child actor. He's got great range and seems to be enjoying himself and we're lucky enough to be along for the ride.

Guns Akimbo is now available on Blu-ray and DVD.