Review: 'Last Moment of Clarity' evokes the spirit of Hitchcock 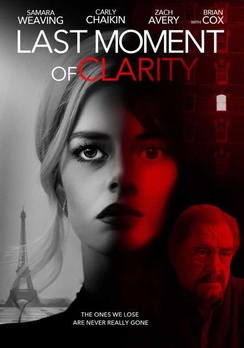 The word Hitchcockian gets thrown around these days like rice at a wedding. It seems that any film that contains twists automatically gets the "Hitchcock" designation. More often than not, these empty words are just that, but every so often a film does, in fact, live up to those lofty expectations.

Last Moment of Clarity is one of those exceptions.

When his girlfriend is murdered by European mobsters, Sam flees to Paris to hide out. Years later, he is still unable to shake her from his thoughts when he becomes obsessed that an actress in a movie is his deceased girlfriend. Now, he risks it all to return to America to see if he's right or just delusional.

I was initially attracted to this film when I read that Samara Weaving was attached to it. After turns in Ready or Not and Guns Akimbo, Weaving has been on fire lately and I was curious to see if she could maintain her string of interesting performances.

While Samara continues to turn in provocative performances, she isn't the focus this time around and that's actually not a bad thing. Lead actor Zach Avery, whose work I was previously unaware of, is tasked with shouldering the lion's share of the heavy-lifting in Last Moment of Clarity and he delivers spectacularly.

As a man mourning the loss of his soul mate, Zach brilliantly conveys the pain and anguish of loss and the uncertainty of closure. As he's on the run, he has been unable to properly process the shocking death of his girlfriend and that factors into his perceived psychosis and helps to drive the intrigue that pays off in the third act.

I was also impressed by the performance of Carly Chaikin who was great in Mr. Robot, but hasn't much of a big screen resumÃ©. In Last Moment of Clarity her career continues on its upward trajectory with a fine and unexpected performance. Carly's brilliance is a natural progression of her work in Mr. Robot and teases future big-screen roles that will only continue to showcase her budding talent.

Beyond the performances, special recognition should be given to first time writers and directors Colin and James Krisel. They have teamed up to create a slow-burning noirish thriller that would make Hitchcock smile if he were still with us. Unlike most Hollywood films that tend to spoonfeed its audience from start to finish, Colin and James choose to start their film with a hazy indifference to their audience that only heightens their intended confusion.

This confusion parallels the sense of loss in Sam and really keeps the audience off-balance while it sets up its shell game. By the time the film gains traction in America, the audience has been fully primed and is left to appreciate all of the delicate turns that ultimately culminates in a rather unexpected resolution of events that completely satisfies.

Last Moment of Clarity isn't your typical thriller and that's a good thing. It really gets lost in its own obsession and the human nature to find connections, even if they aren't there. Really, it's a perfect treatise on the human condition, but this one actually seems to have a semblance of positivity to it, which is refreshing.

Last Moment of Clarity is now available on DVD.