Review: 'We Summon the Darkness' conjures up nostalgic horror bliss 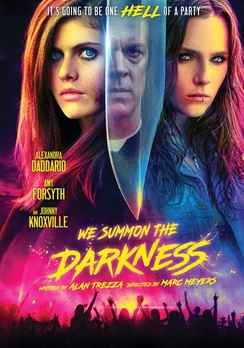 Horror buffs generally acknowledge that the 1980s were the golden period of slasher flicks. So many iconic and classic gore films came out in that decade that it would be near impossible to list them all. Movies such as Friday the 13th, A Nightmare on Elm Street, The Shining, Videodrome, Sleepaway Camp and Slaughterhouse are just some of the classic thrillers from this time period.

So, when the opportunity arose to review a new period horror flick from this era, how could I say no?

Remember that I'm one of those self-described horror buffs, so it was with equal parts excitement and trepidation that I sat down to watch We Summon the Darkness. I'm happy to report that not only does the film hold up to the high bar of quality from that time, but it injects a bit of a twist on the genre that no one would have seen coming in the 1980s.

I went into the viewing without knowing much about the film other than it stars Alexandra Daddario and that it was a horror slasher set in the late 1980s. I highly recommend that you try and avoid as much as possible as well as I was quite entertained in the twists and some of them are spoiled even in the trailer below. That said, the film is much more than a one-twist pony, so even if you know more going into, there's so much to enjoy in We Summon the Darkness.

It's the late 1980s and a rash of Satanic murders is sweeping the Midwest. Alexis and two of her friends just want to get to their heavy metal concert and let loose. At the show, they meet three guys and decide to continue the party back at Alexis' house. What starts out as a good time, quickly turns deadly.

Don't worry, I won't give the twist away in the review, but it was definitely not something that I saw coming. But even without it, the film still will have you singing it's nostalgic praises. Early on, there's an establishing blacktop shot of driving that is almost a direct callback to The Texas Chainsaw Massacre.

In a weird twist of fate, my wife and I are watching the first season of True Detective (a re-watch for me, her first time) and that's the show that really put Alexandra Daddario on the map for me. It's always interesting to see how young actresses evolve over the career, especially one who got overnight success.

After becoming a name, Alexandra made some expected choices, including a lead role in Baywatch, but horror is actually the genre were she but her teeth long before she turned heads in True Detective. Roles in The Attic and Bereavement gave her instant horror bonafides, so it's nice to see them pay off in We Summon the Darkness.

In fact, Alexandra had a lead role in 2015's Burying My Ex which was written by We Summon the Darkness screenwriter Alan Trezza. So, it's a good bet that the role of Alexis was written with her in mind, and she knocks it out of the park.

For my fellow horror buffs, there is plenty of blood and guts to keep things interesting while hitting all of the time period highlights. I never thought that I'd be so giddy to see Jolt Cola make its cinematic comeback.

Finally, the one performance that must be lauded before summing up is the one turned in by Johnny Knoxville. Over the years, he's been a bit hit or miss for me, but he's incredibly effective in his limited screen time. In fact, I will give him the highest compliment that I can think of, his performance as Pastor John Henry Butler is the best fire and brimstone preacher turn since Michael Parks in Red State.

Parks was robbed of an Oscar nomination that year. Yes, that's how perfect Johnny Knoxville is in this film and I only hope that there's some way for him to bring this character back for another performance. Given the current state of everything, this is probably a pipe dream, but one can only hope that a strong cult following on home entertainment might make it become a reality one day.

That being said, Johnny Knoxville really needs to explore this side of his acting chops because he's sinfully exquisite and a complete joy to see him act. I never thought I would ever say something so flowery about a Johnny Knoxville performance but these are strange times indeed.

We Summon the Darkness is now available on Blu-ray and DVD.