Review: 'You Don't Nomi' is a classy homage to a trashy film 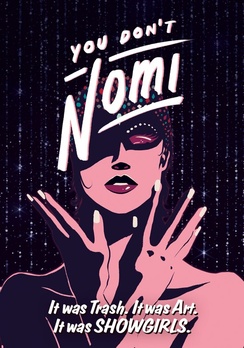 What do RoboCop, Total Recall, Starship Troopers, Basic Instinct and Showgirls have in common? In addition to being landmark films in their particular genres, they were all helmed by the one and only Paul Verhoeven.

Yes, the dude who got Arnold Schwarzenegger to Mars also gave us an up-close and (too?) personal look at Sharon Stone and Elizabeth Berkley nether regions. Verhoeven has always had an exploitation eye towards filmmaking, whether that vice is violence or nudity or whatever. And yet, the unexpected critical acclaim that Basic Instinct garnered instantly elevated his status, and his follow-up Showgirls is one of the industry's most loathed films, but also one that has gained cult status among his devotees.

And that's where You Don't Nomi comes in.

Billed as a look at the "complicated afterlife" of Showgirls, You Don't Nomi provides a fair and balanced look at the flop stage of the film as well as its reincarnation as a cult classic. A culmination of interviews with film critics and fans of Showgirls, the result is more like a love letter to a film that may have been ahead of its time, or not.

As I was watching You Don't Nomi, I realized that I hadn't watched Showgirls in over 20 years. Over the ensuing years, my tastes have changed and I hope my critical skills have been sharpened.

I grew up with Saved By The Bell. Those Bayside kids graduated from high school the same year that I did in 1993. So, when Showgirls was first released, I was a young 20-year-old who was just as motivated to see the film where Jessie Spano heads to Vegas and becomes a stripper as I was to see an auteur trying to follow up the biggest critical hit of his career.

I remember that when I first watched Showgirls, I wasn't as harsh on the film as my older peers. While true, my motivations may have been a bit more voyeuristic than most, I didn't particularly find the film be as atrocious as many others. In fact, my initial takeaway was one of admiration for Elizabeth Berkley being so bold and limitless in her raw depiction of a young woman doing whatever it takes to make it big in Las Vegas.

Of course, the concept of an established child actress showing some skin to shed their adolescence cocoon and emerge a mature Hollywood butterfly ready for more serious roles is a tale as old as time. That doesn't make it right, but the horror stories are there whether it is Drew Barrymore, Alyssa Milano, Kristen Stewart or more recently with Bella Thorne.

Hopefully, with the changing morals in Hollywood, this sad trend will finally come to an end, but I fear that there will always be a culture in which young actresses feel as though the only way they will be taken seriously is to shed their clothes. For Elizabeth Berkley, the quickest way to leave Saved By The Bell in her rearview mirror was to take the lead in Showgirls.

Of course, Hollywood is also littered with cautionary tales.

I challenge you to name any other movie in which Elizabeth Berkley was the lead. Following Showgirls, her career nosedived into a series of B-movies that were barely watchable. She tried her hand back in the TV world, but it was apparent that audiences were unwilling to forget about Showgirls.

Ironically, she has returned to Saved By The Bell for a nostalgic turn as a grownup Jessie Spano for a hip and edgy reboot of the show for the just-launched Peacock streaming service. Time will tell if she is able to finally shed the film that she hoped would open all of Hollywood's doors, but this country loves an underdog and a redemption story, so I'm willing to bet that better things are ahead for Elizabeth.

As for You Don't Nomi, the documentary really bends over backward to present both sides of the debate, but it's clear which view they support. They readily admit that Showgirls was a trainwreck, but in the same way that the odd film The Rocky Horror Picture Show was able to find a second life as a touchstone in popular culture, so too are audiences starting to see beyond the glitz and glamor of Showgirls to appreciate its place in the zeitgeist.

At the very least, You Don't Nomi motivated me to go back and watch Showgirls. In over 20 years I had never once had a desire to go back and rediscover that film, but I am glad that I did. The best performance in the original film goes to Gina Gershon hands down. She seems to be the only one to realize at the time what sort of film Showgirls had the potential to become.

At the end of the day, changing someone's mind on Showgirls is more difficult than changing their politics, but You Don't Nomi gives a valiant effort. We can all agree that the original film is as terrible as they say it is, but that doesn't mean that we can't also appreciate the beautiful trainwreck that it has evolved into.

You Don't Nomi is now available on Blu-ray and DVD.